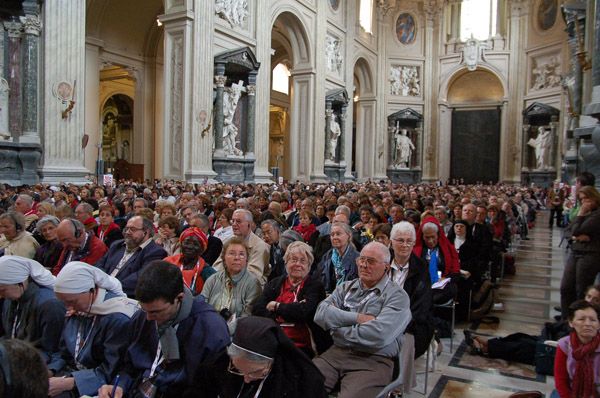 Congress and Cathedral Perfect Match of Topic and Setting

By Dan Valenti (Apr 5, 2008)
The World Mercy Congress plenary sessions are being held at St. John Lateran Basilica. To obtain the proper sense of the historic gathering’s impact, you need to take into account where it is being held.

Each new congressional day begins when St. John Lateran opens its massive doors, or, technically, when the tight security opens the two checkpoints one must pass through to enter the cathedral of the Bishop of Rome, Pope Benedict XVI.

People mill about inside the architectural marvel of the basilica, chatting, settling in, getting their headphones and translators, greeting each other, and performing the many little “housekeeping” tasks that early attend a day like this. Each day in this first-ever Congress on Mercy is, by definition, historic. That is saying something for a Church with a history that goes back more than 2,000 years.

To be on the scene here as history happens conveys its own enormity. And by the way, there could be no more appropriate setting for this gathering than Rome, the Eternal City, in its time variously the world’s center of temporal and spiritual power. Yesterday Caesar, today the Pope.

Singing the Day into Being

Friday’s plenary session is not called to order but sung to order – praying twice, as they say – as a choir of nuns in powder-blue and gray habits sings the opening hymns. The female sound, a lovely mix of young voices with the sopranos stealing the song, circulates in wavy echoes through the huge church whose pride is its imposing history and the gravitational architecture that reflects the grounded greatness of its past.

To better understand the import of the World Mercy Congress, one should have at least a passing appreciation for Saint John Lateran. The Cathedral of Rome was founded by Constantine during the papacy of Sylvester (314-335). Fire, war, and other ravages destroyed the original structure several times. The current building dates to the 17th century, and its monumental façade to 1735.

The enormous bronze doors in the center entrance were removed from the Roman Forum by Pope Alexander VII (1655-1667). Literally, the entryway has been traversed by Roman Emperors and Pontiffs, an exclusive class of the most powerful men who have ever lived. They have rended to Casar what was Caesar’s and when it was his, so long ago, and does the same to the Holy Father, whose time is now.

Inside, the basilica measures about two football fields long encompassing five naves separated by gigantic pilasters designed by Borromini in the 1750s. By Rome standards, that’s like last week.

The dozen pilasters are unlike any supporting structure I have ever seen or could ever imagine. Inside of them, Borromini set green marble columns with carved niches, each containing a statue of one of the 12 apostles. These white marble giants, with their 3D carving and offsetting background of emerald-green marble, practically come to life before your eyes. They are not alive, of course. They only seem that way because when you drink them in, you are all the more so.

Floor and Ceiling, and All in Between

Two even greater marvels, one above and one below, offset the pilasters: the stunning gilded ceiling in the central nave and the Cosmatesque floor under which were found significant Roman ruins.

The center tabernacle was built in the late 14th century. Twelve frescoes (the Good Shepherd, the Crucifixion, Mary, etc.) decorate its golden nooks and crannies. Above the tabernacle rest two silver reliquaries. They contain first-class relics from the heads of St. Peter and St. Paul. Beneath the tabernacle is an altar that can be used only by the Pope.

This architectural description could take pages. We cut it short, having given you a taste of the beautiful setting for the Congress’s plenary sessions, which have been excellent.

Weathering in on Mercy

Friday morning brought a sharp change in the weather. Since arriving in Rome early Tuesday, we have been blessed with mild, even summery conditions with sun, clear skies, and peak temperatures in the mid to upper 60s. Today, however, the skies clouded up with a streaming wind and much cooler temps. Rome in early spring can do a “180” with the weather on a moment’s notice.

The curious effect of this cool front was the way it drove people closer together, literally. Amassing this morning outside the cathedral before the checkpoints were open, people drew close together, huddling like pasture animals circling into themselves to seek protection during a storm. So this Friday of considerations of Divine Mercy had not even officially begun, and we had seen acts of mercy breaking out: people trying to keep each other warm with their bodies, people making small talk, and people laughing. The weather jokes were flying like the one-liners at a Friar’s Club Roast.

This illustrates one of the finer points of compassion, empathy, and mercy – though first an idea then an attitude, it comes alive only as action. Mercy comes alive in the most humble moments of human contact – a door held for a stranger, a smile to a passerby, a set of directions for a lost traveler, a drink of water for someone who’s thirsty, a supportive word for someone who’s down, a coin dropped into the cup of a street beggar.

Large acts of heroics owe more to irrationality and adrenaline than to inspiration and will, to say nothing of mercy.

But how do we properly account for the small acts of kindness that do not have to be done but are done nonetheless, many times a day, throughout a lifetime? Why be considerate and compassionate instead of acting with selfish indifference? True, many do act indifferently, hardened of heart, but many – maybe even many more – do not. Why? Quando, as they say in Italian?

This is a largely ignored question, often lost in the devotional surface. Devotions are fine, but in their proper place. Devotions cannot be the horse. It must be the cart, pulled by the horse of merciful action. We would do well to ponder this question, for in the answer we have the mystery of mercy unfolded, the origami paper dove returned to a flat page, the tell-tale folds indicating how the dove was first formed.

Mercy forms when the heart is folded by God. It is not hard work for Him to do this and no work at all for us. We only need to be disposed to let Him go to work. Thus passively formed, we turn to mercy as naturally as the newborn child instinctively gulps its first breath of air.

To its credit, the World Mercy Congress has advanced this question and offered some responses.

The plenary sessions have had one thing in common. They have presented God’s love for us as a necessity of which we need to be aware. Put it this way: God’s goodness is our amniotic fluid, giving birth to our zest for life and love. In mercy, we find our element as the bird finds the sky and the fish the water. To be without this quintessential divine quality runs counter to the natural order of life and circumstance. It is hatred that is the aberration and perversion, not love. It is the hard heart that is freakish, not the heart of goodness and peace. That’s what the leaders of this conference are telling the world.

To be without this enfolding by God is to be left without solidity, a coreless creature adrift in a contemporary society that has found an addition in indulgence and a false paradise in perversion. To be this way is to be without awareness of one’s core that is rooted in the Kingdom of heaven, within.

In that sorry condition, we are like drowning people adrift in the ocean, flailing about trying to keep our heads above water. We cannot be happy this way. A person in this condition works hard indeed, but to what avail? He or she may gain the whole world, but at what cost? Fortunately, God sees all this and stands constantly on vigil, ready with love, mercy, and forgiveness.

What is the desperation of life in the fast lane but a panicked attempt to distract oneself from the urgency caused by a self-imposed deadening of soul? What are power, wealth, fame, indulgence, addiction, consumerism, and the frenzied pace of technocracy but the soul’s jittery flight from one attempted escape to the next?

Mercy is the “coach” who “calls God’s number” and sends him back into the game when we have given up. Like the star athlete, God heeds his own nature, which is love and mercy itself. He never fails to answer the call. No matter how many points we are down, a God so disposed by mercy cannot do anything but rescue victory from the jaws of defeat.

This is what all the speakers at the World Mercy Congress are saying. We wonder, will the world begin to listen?

Dan Valenti writes for numerous publications of the Marians of the Immaculate Conception, both print and online. He is the author of “Dan Valenti’s Journal” at thedivinemercy.org.