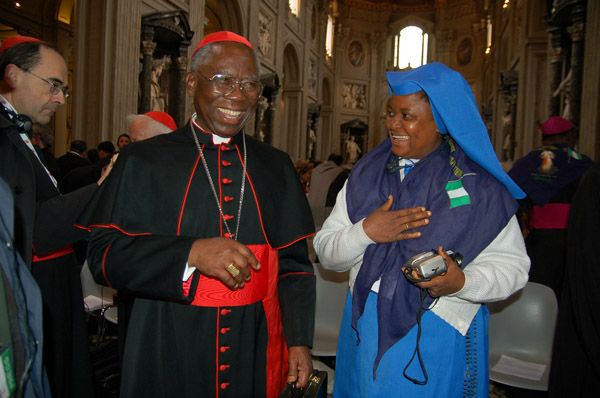 Nigeria’s Cardinal Francis Arinze, head of the Vatican’s Congregation for Divine Worship and Discipline of the Sacraments, following his talk on Day Three of the congress.

By Dan Valenti (Apr 4, 2008)
Divine Mercy in the sacred liturgy took center stage and shared the spotlight at the World Mercy Congress on Friday, April 4, as Nigeria’s Cardinal Francis Arinze, head of the Vatican’s Congregation for Divine Worship and Discipline of the Sacraments, presented reflections to delegates in St. John Lateran Basilica.

“The consoling and deep mystery of God’s mercy permeates the public worship of the Church,” the Vatican’s “liturgist-in-chief” said. “The sacred liturgy sings on page after page the wonders of the divine love [that] shows itself especially as mercy.”

Death Would Not Win

Cardinal Arinze traced the manifestation of Divine Mercy throughout history, going back to original sin. After man had lost God’s friendship through disobedience, God nonetheless “continuously helped all men to seek and find Him.” Again and again, the Father offered a covenant to man, whom he “did not abandon to the power of death.”

Divine Mercy continues this care of God for His children to us today, reaching people in a special way through the Sacred Liturgy, Cardinal Arinze said.

“Jesus Christ, the manifestation of God’s saving and merciful love for all humanity * did the work of our redemption,” the Cardinal said. “He gave perfect glory to God. He instituted His Church and entrusted to her the preaching of his Gospel and the celebration of his savings mysteries. Jesus thus sent His Church to exercise the work of salvation by means of sacrifice and sacraments, around which the entire liturgical life revolves.”

The liturgy, Cardinal Arinze pointed out, is the primary means by which Catholics receive Divine Mercy and grace. In the liturgy, “God feeds us with His word, His forgiveness, His mercy, and His life.” The point became clearer as Cardinal Arinze commented on the Sacraments as unique “channels” of God’s merciful love for us.

BAPTISM: Baptism, Cardinal Arinze said, “plunges people into the paschal mystery of Christ.” The sacrament confers our spiritual adoption as children of God.
CONFIRMATION: This is the sacrament of “completion,” the Cardinal said. Those confirmed in the faith “become more perfectly bound to the Church and are enriched by a special strength of the Holy Spirit.
EUCHARIST: Communion provides the “fount and apex of the whole Christian life,” Cardinal Arinze said. “That Jesus feeds us with His Body and Blood and remains with us in the tabernacle, these are wonderful manifestations of His mercy and love.”
RECONCILIATION: Cardinal Arinze called the sacrament of Penance the medium that delivers “the pardon of God for offences committed against Him. Sinners are at the same time reconciled with the Church, which they have wounded by their sins.” He said Jesus “shocked” the religious establishment of Israel “by identifying His merciful conduct towards sinners with God’s own attitude towards them.” The supreme irony is that the Israeli religious authorities condemned Jesus for blasphemy.
ANOINTING OF THE SICK: Here, Cardinal Arinze pointed out, “the Church commends the sick to the suffering and glorified Lord Jesus and exhorts them to be associated with the passion and death of Christ.” This is mercy.
HOLY ORDERS: Those who follow a vocation into the religious life are in a literal way appointed as ministers of God’s love and mercy, the Cardinal said. They do this, he noted, “by word and sacrament.”
MATRIMONY: “Christian spouses,” Cardinal Arinze said, “receive grace to help each other attain to holiness.” He said there could be no higher example of friendship and merciful love, since the heart of marriage is to care more about the other than about oneself.

“Theologically, it is significant that this Sunday is the conclusion of the octave of Easter,” Cardinal Arinze said. “Thus is shown the strict link between the paschal mystery of Redemption and the Feast of Divine Mercy. The novena in preparation for Mercy Sunday begins on Good Friday. This is eloquent. We are adoring the merciful God, who sent sent His Son to save us through the cross.”

He noted that Pope John Paul II, in declaring in April 2000 that the Second Sunday of Easter would have the name of “Sunday of The Divine Mercy,” did not create new liturgical texts. “Providentially, the reform of the texts of the 1962 Missal, following on the Second Vatican Council, had already supplied us with prayers and readings that speak of the mystery of God’s mercy.”

Other points touched upon by Cardinal Arinze included:

“There is no doubt,” the Cardinal concluded, “that the Sacred Liturgy sings of God’s love, which is mercy. May the Most Blessed Virgin Mary, Mother of Mercy, obtain for us the grace to sing love and live the riches of Divine Mercy as reflected in the public worship of the Church.”