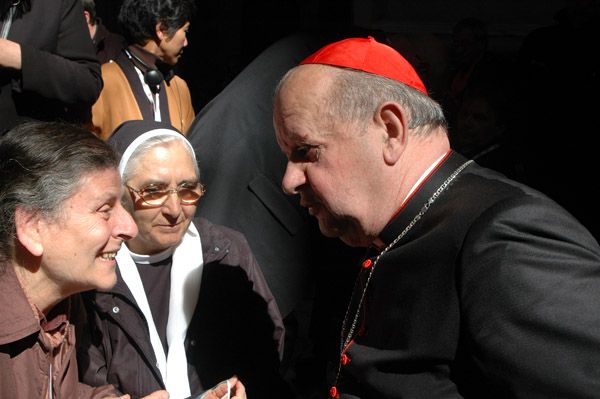 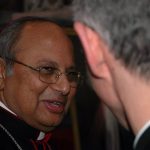 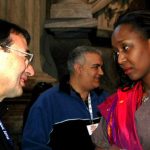 The final day of plenary sessions brought delegates to the Church’s first-ever World Mercy Congress to their senses, to their feet, and to their funny bone Saturday (April 5) at St. John Lateran Basilica in Rome. In the end, Cardinal Christoph Schönborn of Austria and Cardinal Dzwisz of Poland called upon delegates to return home to keep the flame of mercy alive.

THE SENSES
The senses were stimulated in a wide-ranging talk by Archbishop Malcolm Ranjith of Sri Lanka, Secretary of the Doctrine for Divine Worship and the Discipline of the Sacraments, on the difficulty of interreligious harmony.

Archbishop Ranjith, formerly Apostolic Nuncio to Indonesia and East Timor, said increasing ethnic conflict in Sri Lanka prompted the organization of an interreligious conference in an attempt to foster lasting peace. Leaders of Catholicism, Buddhism, Hinduism, and other faiths met in August 2007. The spiritual leaders sat at a round table as a symbol of their equality and respect for one another, he said.

Shared Values
“It was a very difficult problem to solve,” Archbishop Ranjith said, because of the selfishness and fear caused by ethnic hostility. For this reason, he said, “the shared virtues of goodness and mercy were therefore very important in helping us.”

The prelate pointed out that in addressing such imposing challenges as ethnic hatred and religious intolerance, justice is not enough. Justice alone, he said, would be doomed to failure because it would devolve into revenge and continue the cycle of violence. In fact, justice without mercy would lead to the destruction of justice.

In support of his point, he cited Pope John Paul II and Pope Benedict XVI. Referring to John Paul, the Archbishop said justice needs love to be complete. And calling upon Pope Benedict’s Angelus of September 16, 2007, Archbishop Ranjith said the mercy of God must be vigorously proclaimed.

We must, he said, “find non-violent solutions to our problems with other faiths.” He praised the visit to Sri Lanka by Cardinal Schönborn of Austria to meet with Buddhist leaders. The meeting concluded with a joint resolution that the two faiths would continue to work for peace.

‘Entering into the Mystery of Love
Mankind, especially today, needs Divine Mercy, Archbishop Ranjith said. Mankind needs to discover “true religion,” which he defined as “entering into the mystery of love, which permits us to love everybody.” He said all faiths can do this. The Archbishop said we should all aspire to Jesus’ shining example when He counseled “Judge not, lest you be judged. Forgive, and you will be forgiven.”

The enemy of mercy is “the anger of selfishness and the rejection of human dignity,” Archbishop Ranjith said. Unfortunately, he observed, these are “growing at a phenomenal rate.” This is not just an economic problem or a political problem, but also a spiritual problem. However, often religion is poisoned by fundamentalism, he observed, which perverts “true religion in the way it links the concept of religion to power.”

The Archbishop called upon all faiths to reject fundamentalism and the literal interpretation of scripture and sacred texts, because such rigid and judgmental approaches “allow no reason for the mercy of God to enter the heart.”

Following Archbishop Ranjith’s talk, Br. Jason Lewis, MIC, praised the witness as “a fantastic testimony. He was right on the money. I hope everyone heard what he said and that more people follow his counsel. Wow! It blew me away.”

The senses had been touched.

ON THEIR FEET
Delegates were brought to their feet by Immaculee Ilibagiza, who spoke of her harrowing months hiding from killers during the Rwanda genocide in 1994, when a million people were murdered in a matter of months because of ethnic conflict. Hiding in the 3-foot-by-4-foot second bathroom of a house with eight other women, Immaculee said she was close to losing her mind with terror and blind hatred.

She found the will to survive the nightmare through an appeal to God, daily reciting the Rosary and the Chaplet of the Divine Mercy. Gradually, the light of God entered into her heart, freeing her from the paralysis of despair and anger and replacing them with compassion for the killers.

Delegates Show their Support
When the horror ended, she learned that the killers, some of whom she had previously known as friends and playmates prior to the genocide, had murdered most of her family. This included her parents, grandparents, and nearly all her siblings. At that point in her witness, Immaculee choked up and paused to hold back tears. As she struggled to compose herself, the crowd burst out in applause. It was a merciful show of support that did its job. Immaculee continued.

Despite her grievous personal loss, the devastation of her home, and the wounds the madness had carved into her country, Immaculee said she was able to forgive and let go of the poison of hatred. She attributed this solely to the intervention of Divine Mercy.

Following her address, the crowd gave her a standing ovation.

A CALL TO ACTION, THEN A LAUGH
The funny bone was tickled by Cardinal Stanislas Dziwisz, Archbishop of Krakow, ex-member of the Prefecture of the Papal Household and for nearly 40 years personal secretary to Pope John Paul II.

Before the laughter, Cardinal Dziwisz elicited enthusiastically applause when he declared in his opening line: “I’m convinced this Congress will not be the last one.” The Cardinal was clearly directing the attention of the delegates forward, knowing that, in a sense, the first World Mercy Congress can only be declared a success if it sparks a renewal of Divine Mercy worldwide.

That, he declared, would be the task of the regional and national congresses that will take place beginning later this year and continue in 2009 and 2010 on several continents, including North America (the United States), Europe, Africa, Oceania, and South America.

Becoming Merciful
“We have to be devoted to Jesus and the image [of Himself] he ordered St. Faustina to [paint],” Cardinal Dziwisz said. “If you look at a picture of mercy, you will become merciful.”

He said “the theme of Divine Mercy … calls upon all of us here to imagine mercy” for the world. “Pope John Paul II entrusted the whole world to Divine Mercy. He felt concerned for the whole world.” The Pope knew, Cardinal Dziwisz said, that this message could “touch people all over the earth.”

He urged delegates to leave Rome and return home determined to spread Divine Mercy. “We need to keep the spark of God’s mercy alive, and I think that we have lit that spark here in this basilica. We have to convey to the world this force of mercy, because in mercy, the world will find peace and happiness.”

Bringing the House Down
Cardinal Dziwisz brought the proverbial house down when he noted that he would end his comments there, after only a few minutes: “That’s it. No more,” he said. He did this because the program had been running late, and the noon Mass in St. John Lateran had already been delayed so that the plenary sessions could continue.

Cardinal Schönborn retorted with a smile, “This is a very short lecture.” More laughter.

Cardinal Schönborn then used a football analogy: “And so, Cardinal Dziwisz has already thrown the ball onto the football field.” In other words, he had challenged the delegates to return home to spread the fire of Divine Mercy.

Cardinal Schönborn ended the plenary sessions of the historic congress with a provocative question: “But who is going to [light] the match?”

Does anyone have the answer?