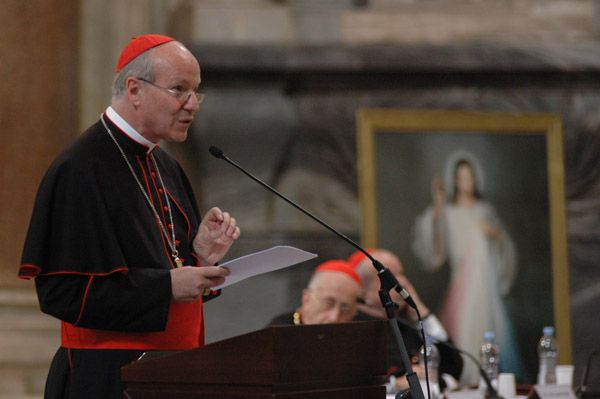 By Dan Valenti (Apr 3, 2008)
Inside the cavernous St. John Lateran Basilica, the cathedral of the Bishop of Rome, the nuts and bolts of the World Apostolic Congress on Mercy began to be assembled in earnest with opening remarks and the gathering’s first extended teaching.

Cardinals Christoph Schönborn, Camillo Ruini and Stanislaus Dziwisz greeted some 8,000 attendees with words of encouragement and wisdom. Cardinal Schönborn of Austria, invoking the Holy Spirit, asked those gathered to bring their “minds and hearts up to God in a spirit of wisdom, so it may bring forth faith and bring us into true testimonies of truth and love.”

“Love is something that builds” Cardinal Schönborn added. “The mystery of Divine Mercy is merciful love, which seeks intervention in our lives.” Time and again, Cardinal Schönborn came back to the point that Divine Mercy is a way of life first, a message second, and a devotion third. “I truly hope the World Congress on Divine Mercy, which is defined as being apostolic, may stimulate a new missionary front in the name of God and the name of mercy not just in all the churches of Rome, but in all churches, indeed, everyplace worldwide.”

Italy’s Cardinal Ruini, noting the 200 delegations from every corner of the globe convening for the Congress, recalled how the Congress came to be called following an international meeting in Krakow, Poland, in 2006. Noting that Pope Benedict XVI’s fervent endorsement of the idea of a congress on mercy, Cardinal Ruini directed the collective vision of attendees ahead. “At the end of this [World Congress], God willing, we will follow up with National and Continental Congresses in order to spread the precious message of Divine Mercy.”

One point worth noting is that throughout Day 1 of the Congress, from Pope Benedict at his opening Mass in St. Peter’s Square to the opening remarks of the Cardinals, the leaders went out of their way to refer to this international gathering as a Congress on “Divine” Mercy. The adjective in front of “Mercy” had been formally left out by the meeting’s organizers out of concern it would place an unintended but perceived emphasis on the private, devotional aspects of the message. The Pope and the others put those concerns to rest, being comfortable in calling this what it was: a Church-wide consideration of “Divine Mercy.” In the end, the Pope and Cardinals reinstated the adjective “Divine.”

Cardinal Dziwisz of Poland made news of a sort when he added a third to the “two great apostles of Divine Mercy for our times, St. Faustina and our beloved Pope John Paul II.” The third man in, in this case, would be none other than Benedict, successor to the Great Mercy Pope. “[Benedict] has gathered us here around this mystery to help us all discover The Divine Mercy. We cannot forget his intervention, his Regina Caeli last week, and his beautiful homily today.”

Following the welcoming remarks, Cardinal Schönborn conducted the first teaching on Divine Mercy, a brilliant and at once accessible treatment boring into the core. The Cardinal began by talking extensively about the life of John Paul II, liberally quoting the Pontiff’s many pronouncements on Divine Mercy.

“I believe the words of John Paul are the guidelines for our lifetime. [His] are the words underlying the organization of this Congress.” He mentioned how the young man, Karol Wojtyla, toiled in a chemical factory as a forced laborer for the Nazis, discovered the message of Divine Mercy in the writings of Sr. Faustina Kowalska. That discovery, Cardinal Schönborn said, enabled Wojtyla not only to save his own life but to find the means of saving the world.

“Who [in their right mind] could have said back in 1942 that the young man seen trudging to another day of dreary work in that chemical factory, the man in the wooden shoes, would one day become Pope and dedicate the world to Divine Mercy?”

Breaking into the next part of his talk, Cardinal Schönborn joked that if he was putting everyone to sleep, “Don’t be afraid. God will teach you even in your dreams!” He got the improvised line off with expert timing to an uproar of laughter.

He then reflected upon the inner strength at the heart of Divine Mercy. Mentioning the frequent and sometimes justified criticism against the Catholic Church for “talking too much about sin,” he turned it around into a positive. “Sure, we can easily talk about sin because we also teach Divine Mercy. Because we believe God is infinitely merciful, we do not need to hide our sins. We don’t have to be innocent because we know God is merciful. This is the only way we can understand, for example, how the saints could also think of themselves as great sinners. They could only do that because they had experienced Divine Mercy.”

Cardinal Schönborn then asked his listeners to ponder the nature of a merciful God. “How is our Heavenly Father merciful? Who can say? How can we know it? How can we [inject that knowledge] into our blood? How can we, as sinners, reflect upon God’s perfection and His mercy?”

Cardinal Schönborn noted the many times in the life of Jesus where He extended mercy: the raising of Lazarus and the comforting of Lazarus’s grieving family, the healing of lepers, restoring sight to the blind, and in many other instances of tending to the physical, psychological, and spiritual ills of hurting people. The shining example of this is Jesus’ parable about the Good Samaritan. Jesus made clear, Cardinal Schönborn said, that the merciful one in the story was the one who SHOWED mercy, making the point that mercy is an action verb.

Again, this brought him back to his controlling idea regarding mercy: that unless mercy is something we live and do, we are wasting our time.

Cardinal Schönborn concluded with what he called the “great sin” of contemporary times: insensitivity and indifference. He exemplified this with the current trend in society and medical science to offer euthanasia as a form of mercy. How can it be merciful, he asked, to kill someone?

“Very often we feel we don’t need anything,” Cardinal Schönborn said. “We have all the answers, and we [certainly] don’t need mercy. This came clear to me when I worked with alcoholics and those with addictions. Often, they would not acknowledge how much they needed help. How is it possible for mercy to take root where there is no acknowledgment of our need for it?”

He cautioned against “hardness of heart. We shouldn’t become insensitive. In fact, that is the primary sin of man vis-à-vis God. Our hearts have become hard.”

The embrace of Divine Mercy, the Cardinal said, is the sure-fire antidote against this happening.

“Accept the mercy of God, this infinitely precious gift,” Cardinal Schönborn exhorted the people after his formal remarks concluded. “Accept, and then give it to others. The more you give it away, the more you end up keeping.”