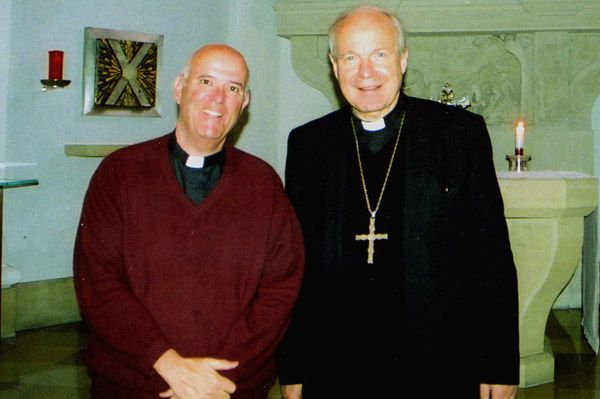 It was a meeting of presidents. The topics were mapping, mercy, and mandates. Gratitude and eagerness were the sentiments.

During a pilgrimage in Europe, Fr. Matthew took the opportunity for an impromptu meeting of the minds in Vienna on May 19 with Cardinal Schönborn.

“We talked about the past, the present, and the future,” reported Fr. Matthew upon his return to the United States.

The past includes the Church’s first-ever World Apostolic Congress on Mercy, held in Rome in April 2008.

The present includes national and continental Mercy Congresses being held around the world. (The North American Congress on Mercy was held Nov. 14-15, in Washington, D.C.)

The future includes regional Mercy Congresses around the world followed by a second World Apostolic Congress on Mercy.

A congress is a Vatican-approved initiative in the life of the Church that focuses on a particular aspect of the faith. The Mercy Congress aims to bring greater awareness of — and participation in — the mercy of God as a source of hope, healing, and renewal for all people, all creeds, all families, all communities, and all nations.

The second World Apostolic Congress on Mercy is scheduled for Krakow, Poland, in October 2011. Father Mauriello, pastor of St. Roch’s Parish in Greenwich, Conn., will again lead the delegation from the United States.

Father Matthew said his meeting with His Eminence Cardinal Schönborn began with an expression of mutual gratitude.

“He told me how he had been briefed of the successful Congress we had here in North America,” said Fr. Matthew.

Father Matthew then expressed his appreciation for Cardinal Schönborn and his efforts to fulfill the Holy Father’s mandate for the Mercy Congress.

“It’s all coming together,” Cardinal Schönborn said of the world, continental and regional congresses. “We are like one big family.”

“You’re our official Daddy of the Mercy Congress,” Fr. Matthew told His Eminence.

“I’m a very absent Daddy, I’m afraid,” Cardinal Schönborn said. “There are so many Congresses going around the world now, and of course I cannot be at all of them.”

“So I pointed to his chest and said, ‘I know, but I’m sure you always have us in your heart,'” said Fr. Matthew.

Father Matthew said in an interview last week that the moment was touching, sincere, and edifying.

The Holy Father’s Mandate
The two men then discussed how to proceed. They agreed the top priority is to ensure all future events follow the Holy Father’s mandate given at the conclusion of the World Apostolic Congress on Mercy.

“Go forth and be witnesses of God’s mercy, a source of hope for every person and for the whole world,” Pope Benedict XVI said in his Regina Caeli address on April 6, 2008.

“We have to continue to be witnesses of the Lord’s mercy,” Cardinal Schönborn said.

Father Matthew said Cardinal Schönborn shared his thoughts on what should be given most prominence in all Mercy Congress gatherings.

In order of importance, the focus should be:

• Theology — the study of mercy based on scripture and Church tradition.
• Spirituality — taking the Lord’s mercy and “living the mercy message” through the spiritual and corporal works of mercy.
• Devotions — the channels for the outpouring of Christ’s grace. As evidenced at the World Congress and North American Congress, a large majority of attendees are Divine Mercy apostles who practice the devotions given to St. Faustina.

Before their meeting, Fr. Matthew had the opportunity to concelebrate the morning Mass with Cardinal Schönborn at his private chapel adjacent to St. Stephen’s Cathedral, the mother church of the Archdiocese of Vienna.

The Vienna meeting followed on the heels of a gathering of continental coordinators held on April 30 in Budapest, Hungary. Father Matthew, who attended that gathering, said it served to “rally the troops to pull together for the second World Apostolic Congress on Mercy in Krakow.”

“It was the kick off,” said Fr. Matthew.