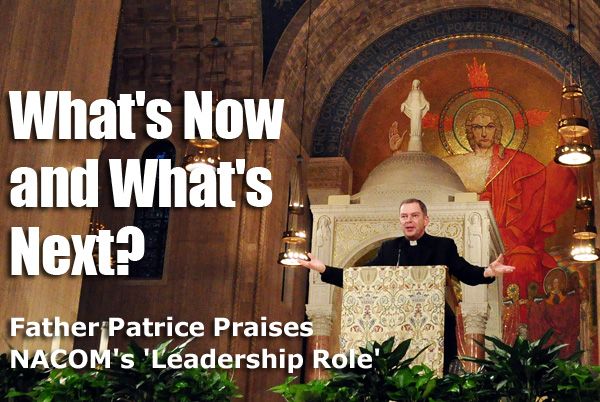 By Dan Valenti (Nov 14, 2009)
As globetrotting general secretary of the World Apostolic Congress on Mercy (WACOM), Fr. Patrice Chocholski should have trouble keeping his time zones straight. From Madrid to Washington, D.C., from Africa to Asia, Fr. Patrice has been attending each of the continental congresses that have proceeded as an extension of the first WACOM, conducted in April last year in Rome.

Father Patrice gave the concluding reflection of the historic first North American Congress on Mercy (NACOM), Nov. 13-14, held in the nation’s capital at the Basilica of the National Shrine of the Immaculate Conception.

‘A Source of Renewal’
In an interview before his address to the Congress, Fr. Patrice of France said that NACOM has become “a source of renewal for the Church in North America that the Holy Father has been following closely, given the continent’s importance for the universal Church in focusing the world’s attention on God’s mercy.”

He said that, as general secretary of WACOM — commissioned by Cardinal Christoph Schonborn of the Archdiocese of Vienna, Austria, acting for Pope Benedict XVI — “my first duty is to be present at each of the national and continental congresses that will lead up to Krakow in 2011.” The reference was to WACOM II, scheduled for Krakow, Poland, again under the direction of Cardinal Schonborn.

“The national and continental congresses serve as an important bridge [between WACOM I and II],” Fr. Patrice said. “It is wonderful to see the different expressions of creativity in the different congresses, as each interprets this key mission in a unique way, yet still expressing the universal value of God’s mercy. God’s love for us is at the heart of the Christian message.”

Father Patrice said he was most impressed by the North American Congress on Mercy, especially for its theme of “Mercy: Our Hope.”

“This hope is essential to the Christian mission of evangelization. There is no doubt that the North American Congress has taken on a leadership role in the growth of Divine Mercy in the United States, in Canada, and in Mexico.”

Praise for NACOM President
He praised the direction of Fr. Matthew Mauriello, NACOM president. “Father Matthew brings a style of exuberance that is [infectious]. I commend Bishop [William] Lori for his choice of Fr. Matthew to lead this effort.”

Expanding on the key role of NACOM in the Pope’s efforts to spread God’s mercy to the world, Fr. Patrice said, “I have the feeling that in North America, Divine Mercy is helping to grow the Catholic faith and better integrate it into the daily life of people. The message of mercy has credibility. Even those who are not Catholic or Christian — even those who may not have faith at all — hunger for love.”

He said that the evangelization that is behind both WACOM and the national and continental congresses around the world must, however, be done “first and foremost out of a spirit of love. In being here in Washington for [the first NACOM], it is apparent to me, and there can be no doubt, that such love is present. It is being done out of love, and only out of love. This is beautiful to witness.”

Church Needs to ‘Reconnect’
Father Patrice concluded by emphasizing the need for the Church to “reconnect” to those faithful who have been driven away by the unfortunate events of the recent past” (a reference to the child abuse scandal). He said the continental and regional congresses that lead up to Krakow 2001 are playing “a key role” in this effort.”

They are doing so “by bringing credibility to what we profess, which is a message of love, of life, of justified hope, which is only possible because of God’s mercy for the human race,” he said.

Father ,thank you for your time for the Filipinos people, you gave as an inspirations the 3 days events of AACOM was one of the most memorable one meeting our Asian brothers and sisters. This bridged us into one family of the Divine Mercy as Mama Mary acts as our intercessory God bless .