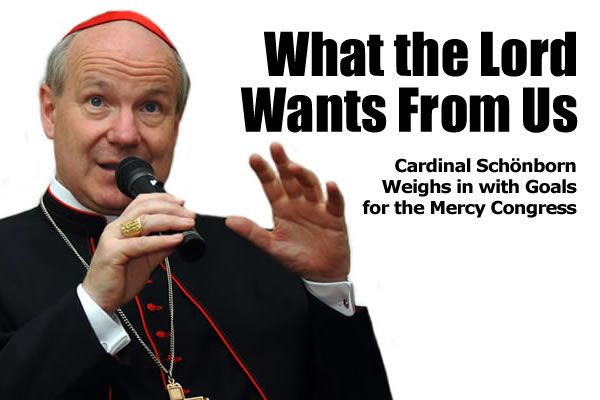 In a letter that, in no uncertain terms, links the North American Congress on Mercy (NACOM) with the revelations of St. Faustina Kowalska, Cardinal Christoph Schönborn of Vienna, Austria, has defined NACOM’s goal as spearheading a new missionary front in the name of The Divine Mercy.

Cardinal Schönborn, president of the first World Apostolic Congress on Mercy (WACOM), held in Rome last year, addressed his letter to participants and planners of NACOM, which was celebrated Nov. 14-15 at the Basilica of the National Shrine of the Immaculate Conception in Washington, D.C. [Learn more.]

In his letter, Cardinal Schönborn quotes the words of Pope Benedict XVI upon the close of WACOM when the Holy Father called the participants to “go forth and be witnesses of God’s mercy.”

“Since this remarkable event with thousand of believers from all over the world,” Cardinal Schönborn writes, “we are witnesses to how Divine Mercy is spreading throughout the world.”

He adds, “The Lord wants us to do these works of mercy. Jesus Himself calls us to deeds of mercy, by words and by prayers.”

Through NACOM — two days of presentations, concluding with Holy Mass — planners sought to sure up an apostolic beachhead in which the zeal of WACOM can take root and flourish in North America.

To that end, in his letter, Cardinal Schönborn quotes from St. Faustina’s spiritual Diary, in which the Polish nun records the extraordinary revelations she had in the 1930s that have sparked the modern Divine Mercy movement, including the Mercy Congress itself.

The passage is the following:

I suffer great pain at the sight of the sufferings of others. All these sufferings are reflected in my heart. I carry their torments in my heart so that it even wears me out physically. I would like all pains to fall upon me so as to bring relief to my neighbor. (1039)

“In these words,” Cardinal Schönborn writes, “we find the true love of Christ that must inspire our humanity today. How many souls have been consoled by the prayer ‘Jesus, I trust in You,’ which Providence intimated through Sr. Faustina!

“Let us pray to the Lord that our heart may be merciful so that we feel all the sufferings of our neighbors,” Cardinal Schönborn continues. “Let us begin to trust in the most merciful Heart of Jesus. Then we can bear all our own sufferings to the merciful Lord.

He added that Pope John Paul II canonized St. Faustina “as a gift of God to our time” — a gift that keeps on giving.

The letter, dated Oct. 7, was read aloud at NACOM, which was one in a series of continental congresses across the globe that serve as a prelude to the second World Mercy Congress, set for Krakow in 2011.

A Church congress is a Vatican-approved gathering focusing on a particular aspect of the faith. NACOM aims to bring greater awareness of — and participation in — the mercy of God as a source of hope, healing, and renewal for all people, all creeds, all families, all communities, and all nations on all continents.

Cardinal Schönborn himself, served as the master of ceremonies for WACOM. During the five-day-long congress last year, he often invoked the Holy Spirit and asked those gathered to allow Jesus, The Divine Mercy, to transform their lives so that they could, in turn, transform the lives of others, particularly those in greatest need of God’s mercy.

“The mystery of Divine Mercy is merciful love, which seeks intervention in our lives,” he said at one point.

O Most Sweet Jesus, we trust that You will hasten the joyful day when the Limitless Love and Inexhaustible Mercy that is in the Triune God is in all our hearts.

O most sweet Jesus, our contrite hearts either rejoice in You or are tormented for You, but use us for Divine Mercy’s end.

This is beautiful! I pray the Lord continues to inspire you and you give us more. May mother Mary continue to be our advocate. Seminarian Lawrence from Uganda.

Let us remember to pray for the many marriages that suffer, due to a person’s inability to forgive himself or herself when a marriage suffers from
infidelity. These marriages are truly able to re ameliorated through the Divine Mercy.

Thank you. This was very inspirational!!