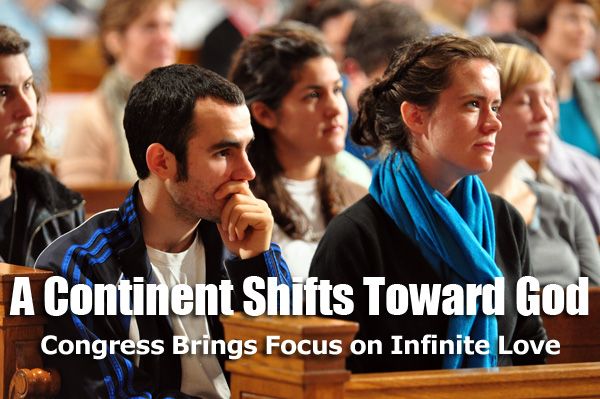 By Dan Valenti (Nov 15, 2009)
For a momentous day in the life of North America, in a development guaranteed not to register on any man-made instrument, the continental axis tilted to God. The full impact of this historic day will not be known for years, but we do know this: the resulting good for an entire hemisphere will be both immeasurable and profound.

Even among the most jaded of conference goers and by the high standards of veterans of similar gatherings, the first-ever North American Congress on Mercy (NACOM) was a spectacular success — as God measures it, certainly, and, yes, even as man does.

In the nation’s capital, Ground Zero for political contention and cultural war, mercy was afoot. The first-ever North American Congress on Mercy (NACOM) was at hand.

Radiance, Pouring Through Her Eyes
On Nov. 14, 2009, in the Basilica of the National Shrine of the Immaculate Conception in Washington, D.C., mercy found a home in the receptive hearts of more than 700 pilgrims. From all walks and circumstances they came — from California to Massachusetts, from Minnesota to Texas, from New Brunswick, Canada, to Puebla, Mexico — thirsting to intensify their love of Divine Mercy, craving to learn more, and on fire to spread it to others.

Susan Buck of Silver Springs, Md., works in human resources for the executive branch of the federal government, attached to the White House. Her journey to NACOM marked an action point, one of no return:

“I know very, very well the depths of God’s mercy and forgiveness of God,” she says. “He forgave me for a very bad sin when I didn’t think forgiveness was possible. Now I want to turn away from mistakes of the past and learn more about how I can extend mercy in my life going forward, to all that I meet. That’s why I came. To prepare myself for what only God knows.”

Susan said she had a strong and undeniable feeling “that tremendous graces would be coming to us [pilgrims] through the speakers at this Congress if we are open to them.” Asked mid-way during the day if that had in fact been borne out, she smiled, pouring radiance through her eyes.

‘She Spoke Directly to My Heart’
Susan referred particularly to the witness of Theresa Bonopartis, who described the utter sense of loneliness and abandonment that haunted her when, as a teen, she aborted a baby boy — a saline abortion in which the baby burns to death in the womb. An existential and spiritual dread pressed upon her soul for years, until she found the courage to take God up on His promise to forgive even the most heinous of sins and the most despicable of sinners. That forgiveness led to reparation and to the establishment of a life of ministry to other women and men dealing with post-abortive trauma.

“She spoke directly to my heart,” Susan said of Bonopartis. She also said she’s now ready to take action to help others, in the way the NACOM testimonials spoke about.

“I came to hear stories of mercy,” she said, adding that she trusts the experience will result in a direction for how she might begin to minister to others. Susan Buck, you see, had just demonstrated the prime prerequisite God places upon his agent of mercy: become open and available. That’s all.

Fly on instruments, using God as your radar. Be willing to serve, and let God handle the rest. He will handle the guidance, direction, resources, and problem solving. The key is trust, as it says in the signature line under the image of The Divine Mercy: “Jesus, I trust in You.” The devil is most assuredly NOT in these details.

“I’m glad that they are having this Congress,” Susan said. “I feel privileged to be here. It’s obvious this is the work of the Holy Spirit.”

• Father Matthew Mauriello, Congress president, who served as master of ceremonies.
• Dr. Scott Hahn, author, who gave the keynote address.
• Dr. John Bruchalski, MD, founder and director of Divine Mercy Care, which performs spiritual and corporeal works of mercy in northern Virginia, Maryland, and the District of Columbia.
• Kellie Ross, co-founder and director of Missionaries of Our Lady of Divine Mercy in Manassas, Va.
• Sister Lucille of the Franciscan Sisters of the Renewal, Bronx, N.Y.
• Fr. Donald Calloway, MIC, superior of the house of studies for the Marian Fathers of the Immaculate Conception.
• Father Patrice Chocholski, Lyon, France, lecturer and theologian and general secretary of the World Apostolic Congress on Mercy, who gave a concluding reflection.
• The Most Rev. William Lori, Bishop of Bridgeport, Conn., NACOM’s episcopal adviser and principal celebrant of Holy Mass that concluded the day.

Who are We? Who is Anyone?
Where faith is required, doubt will be present, for the condition of faith presumes the probability, the potential presence, of doubt. The speakers at the North American continent’s first-ever Congress of God’s mercy witnessed to what had become for them an experiential truth: God’s love for us is not a trick of the imagination, nor is it wishful thinking on steroids. God’s love is real.

The speakers reported of an experience so joyful and profound that they had no choice but to get out into the world and begin sharing it with others, in word and mainly in action.

In the witnesses who spoke on this day, and in the lives of those who heard them, mercy is not an idea. It’s an action. It’s not fluff but a pragmatic and intelligent response to an undeniable inner desire all people share, one roughly suggested by the word “spirituality.”

Who are we, who is anyone, not to believe the truth of what they say?

O Most Sweet Jesus, we trust that You will hasten the joyful day when the Limitless Love and Inexhaustible Mercy that is in the Triune God is in all hearts. O Lord, our contrite hearts rejoice in You or are tormaneted for You, but use us for Divine Mercy’s end.

THANK GOD FOR THAT AND PLEASE GOD HELP US TO KEEP TRUSTING IN YOUR SON JESUS,AMEN.