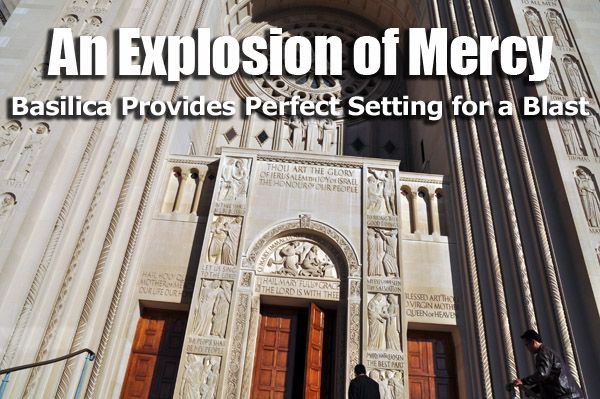 By Dan Valenti (Nov 14, 2009)
At one time deep in the recesses of the North America’s past, in what is now Yellowstone National Park, an enormous volcanic eruption caused a collapse of land that buried the continent in a foot of ash.

Recently, geologists sent divers into Yellowstone Lake. They observed a bulge in the lakebed that has been measured at more than 100 feet. More ominously, the bulge has been pulsating. When it goes off is a matter of time — it might not take place for millennia. Then again, it could happen tomorrow.

A Movement and Message, Building and Building
What has this to do with the first-ever North American Congress on Mercy that took place Nov. 14-15 at the Basilica of the National Shrine of the Immaculate Conception in Washington, D.C.?

Think of the word “eruption,” which we can define as an explosion from accumulated energy that breaks out of confinement to be released in an instant.

That is what pilgrims witnessed at NACOM, an explosion of mercy.

The energy of God’s mercy has been building ever since the fall of humankind as portrayed in the Genesis parable of the Garden of Eden. Like the volcanic activity at Yellowstone, eruptions of mercy have been noted throughout humanity’s history on earth.

In our time, Divine Mercy as a message and movement has been steadily building since the early 1930s, when an uneducated, young Polish nun — Sr. Faustina Kowalska — dutifully obeyed the order of her spiritual director to keep an ongoing diary of her mystical communications with Jesus. Our Lord revealed Himself to Sr. Faustina, today St. Faustina, as The Divine Mercy.

The message of Divine Mercy, recorded in the spiritual classic The Diary of St. Faustina rapidly spread, in spite of a Papal ban for 20 years from 1958 to 1978. Today, it has become what some call the fastest-growing grassroots movement in the history of the Church.

Holy Ash, Wide and Far
For the North American continent, the eruption of mercy at NACOM has sent holy “ash” wide and far. It remains to be seen if the entire continent becomes covered, but the early reports are promising. Much of this has to do with the setting for NACOM.

The national basilica, dedicated 50 years ago, is the continent’s largest church, and its enormity provided perfect conditions for this explosion of mercy to occur. What we have today and going forward, is a loosening of the grip evil has over North America.

Does that sound grandiose? So be it. What pilgrims witnessed over two historic days in Washington, D.C. was a basilica of grandeur serving as a catapult to launch an awareness of God’s mercy, afresh, in North America. The continent has been given yet another spiritual opportunity.

It is hard to think of this happening anywhere else except at, in, and from America’s church.

On first glance at this structure, one notices the 108-foot dome, made of polychromatic tile dominated by a lovely shade of turquoise blue with yellow and red accents. On a more sustained examination, the building’s Romanesque-Byzantine design stands out, symbolizing the harmony of the spiritual traditions and presence of West and East. Seventy chapels can be found inside the grand structure, which is made entirely of stone, brick, tile, and mortar. Amazingly, the basilica was built without a single steel structural beam. There is also no framework or columns.

Blown Away
The energy of God’s mercy produces hope that doesn’t disappoint. Sure, we are human. We are tangential beings who fall short of God’s absolute perfection. Nonetheless, all will be okay if we accept the mercy of God, offered unconditionally and freely.

Albert Einstein rocked our conception of reality when he produced his famous equation E=MC2 (energy equals mass times the speed of light squared). If a similar scientific genius could devise a corresponding formula for Divine Mercy, she would write it DM=ML(I)2 (Divine Mercy equals measureless love times infinity squared).

Oh, what an exciting way to be blown away!