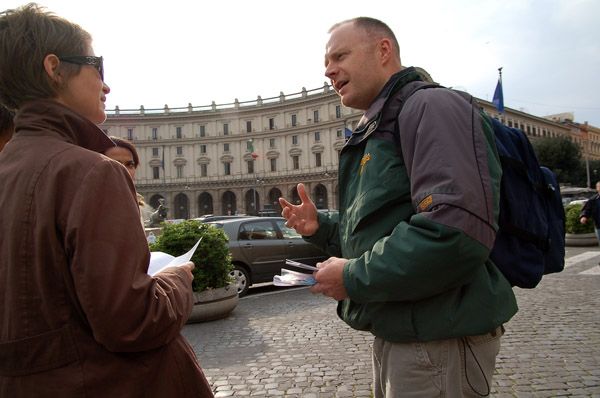 After years away from the Church, Charles Yezak returned. Now he’s at the world congress in Rome, and he’s hoping to spread the message of Divine Mercy to all who will listen.

A Tall Task? Bringing Mercy to the Streets

To touch a soul. Even just one. That’s Charles Yezak’s goal.

It’s Friday afternoon, Day 3 of the first-ever World Apostolic Congress on Mercy in Rome. The schedule calls for a “Mission of Mercy.”

Congress organizers had set the ground rules. Go two-by-two out into the streets. Talk to complete strangers. Tell them about the mercy of God. Invite them to pray inside Our Lady of the Angels Church in the heart of the city, where Eucharistic Adoration and opportunities for confession are underway.

After a powerful day filled with talks, prayer and celebration, this next item on the schedule seems a bit, well, gimmicky to Charles and his mission accomplice, Mary Travis. But they agree they will be good sports about it. And who knows?

“What should we say?” Charles wonders aloud.

“It’s kind of like one of those moments in scripture with the apostles,” says Mary. “You know, when they haven’t a clue what to say, but then they open their hearts to the spirit of God, and when they open their mouths, the words just come out, and God does all the work.

“If you do your part,” she says, “God will take care of the rest. You just got to jump off the diving board.”

Having said that, she appoints herself the silent prayer warrior, stationed off in the periphery, while he does the talking.

“All we have to do is just touch one soul here today,” he says. “One soul.”

They step out from the dark, cavernous, quiet of the ancient Our Lady of the Angels church, out into the maw of modern Rome.

They agree that they should head to where the tourists are because earlier in the afternoon, an American nun stationed in Rome told them that tourists in Rome leave the Eternal City believing in the reality of Caesar but not in the reality of Christ.

“If we head down to Santa Maria della Vittoria, there will be a lot of tourists there,” says Mary. She’s been to Rome before.

It’s a tall task, saving souls on the sidewalk of the city. The streets of Rome are known for their fair share of hustlers, pickpockets and aggressive entrepreneurs.

“This is going to be humbling,” says Mary.

They’re walking fast down a cobblestone side street.

Humbling, because of a nagging realization: By proclaiming God’s love and mercy to complete strangers on the sidewalk, they run a very large risk of being viewed as the sort of people that they themselves have learned to dismiss these three days in Rome.

That’s not the only issue. The other is that both Charles and Mary believe that the most effective way to bear witness to God’s mercy is through relationships built over time. Therefore, is it at all realistic to save a soul by speaking Christ’s name on the fly to pedestrians who are traveling at a headstrong clip amidst the din of internal combustion of downtown Rome?

It’s so unrealistic, in fact, that they are starting to take a liking to the task at hand.

They arrive at the marble steps of Santa Maria della Vittoria. The tourists are swarming. Charles dives in. He’s armed with a handful of prayer pamphlets.

The complete stranger raises his hands up and out, the international sign for “Don’t Take Another Step Closer.” Charles turns on his heal and heads back to Mary.

“This is going to be difficult,” he says.

Mary first learned about Divine Mercy in the 1980s in Medjugorje, where Our Lady is said to be appearing.

“I stepped into a church there, and I heard the most beautiful prayer being sung,” she said.

It was the Chaplet of The Divine Mercy. She’s been praying it ever since.

She’s productive, She practices the corporal and spiritual works of mercy as a matter of course, particularly in the pro-life movement.

Charles learned about Divine Mercy amidst his darkest days. His wife had left him. Without warning, she packed up all her things and was gone.

“The third person in the marriage was missing,” he says.

He’s referring to the Lord Jesus.

“So when she left me, the first thing I did was I turned to the Church,” he says.

He pauses. He keys in on an older couple climbing the marble stairs.

He takes it in stride.

“I knew I could turn to the Church,” he says. “I started to attend Mass regularly, then daily. I started to find strength in the Eucharist and through prayer groups. I needed something to get me on course and to fill the void.”

He didn’t want the divorce. He prayed for reconciliation; it didn’t happen. About a year and a half after the separation he was introduced to Divine Mercy.

“It prepared me to deal with the divorce,” he says. “Knowing that Jesus loves us where we are and calls us to draw closer to Him gives me peace of mind to deal with struggles, including the biggest, most painful experience of my life: my divorce.”

Mary comes out of her prayerful periphery.

“The Lord uses crisis,” she says.

She pauses. “You know, in Chinese crisis means dangerous opportunity,” she says.

By that, she explains that when confronted with crisis, people tend to either delve deeper into the darkness through drugs and alcohol, or step out into the light.

Charles headed straight to the light. He’s now a Eucharistic minister at a hospital. He also leads prayer sessions at nursing homes and religious education classes at a local college where he works. When people ask him what his goal in life is, the answer is simple: to get to heaven.

He used to weigh 250 pounds. Now he’s down to a trim 185. He stopped eating junk food, stopped watching mindless television, stopped feeling sorry for himself.

“Divine Mercy is what changed my heart,” he says.

When he prays the Chaplet of The Divine Mercy at hospital and nursing home bedsides, he’s continually amazed by how many severely ill people wiggle their toes to the sound of that intercessory prayer that Christ gave to the world through St. Faustina.

“They have the famous statue, Bernini’s Ecstasy of St. Teresa,” she says. “Maybe it will bring us the graces we need for all of this.”

Sure enough, inside, to the left of the altar, was the depiction of the moment described by St. Teresa of Avila in her autobiography where she had the vision of an angel piercing her heart with a golden shaft, causing her both immense joy and pain.

The Lord uses crisis. That’s how so many saints are formed.

Back outside, they make their way toward Our Lady of the Angels. Once there, Charles regroups. He approaches a mother and her two daughters. They’re French, but they understand English. He’s offering them a prayer card. They’re apprehensive, but they don’t walk away. He talks to them about Eucharistic Adoration. He tells them about Christ and His Church. He appeals to their sense of culture and history, telling them how Michelangelo designed Our Lady of the Angels.

He points to the door. They take the prayer card. He watches as they walk inside.

He turns around and smiles.