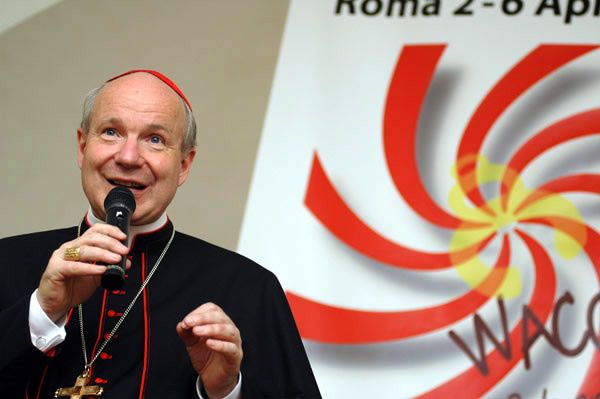 By Dan Valenti (Apr 7, 2008)
In the wake of a successful World Mercy Congress, what’s next? That is the question.

Cardinal Christoph Schönborn of Austria, president of the Church’s first-ever mercy congress, offered his thoughts and made five key announcements.

“How should we go on?” the Cardinal asked about 200 planners and strategists at a post-congressional organizational meeting Sunday (April 6) in Holy Spirit Church near St. Peter’s Square. His remarks came about two hours following the closing Mass he celebrated in St. Peter’s Basilica.

“How do we continue?” he asked. “We don’t have a formal Church structure [dedicated to the Congress].” He said he ended up as chairman of the mercy congress almost as a fluke. “I am president. Father Patrice [Chocholski of Lyon, France] is general secretary. This wasn’t planned. We didn’t seek this. It just happened.”

Nonetheless, Cardinal Schönborn said, this historic week in Rome taught everyone a great deal, enough to begin mapping plans for the future. He then made several announcements:

1. There would be a second World Mercy Congress.
2. Cardinal Stanislaus Dziwisz, Archbishop of Krakow, Poland, would preside.
3. The likely location will be Krakow.
4. Father Patrice will continue as general secretary
5. Vilnius, Lithuania has the inside track as site of the third mercy congress.

“We’ll see how it all comes together,” Cardinal Schönborn said. “We will do it as the Lord indicates.”

He urged international planners to stay in touch with each other, to work closely together, and to share strategies. “National and regional [follow-up] mercy conferences are already being discussed. We ask you to be open and, with great simplicity, seek His will. We want to make known The Divine Mercy through His presence and His merciful heart, [which is] close to all of us.”

“I have a simple proposal,” Cardinal Schönborn told the tired but still enthusiastic strategists. “We should continue to plan in total freedom.” He urged delegates to be creative in their common mission. “We are here for the same reason: to get to know and promote Divine Mercy. But remember, we are not yet a big tree. We are a sapling.” The tender congressional sapling got off to a good start, he said, but needs loving care so it may grow into a great tree.

Cardinal Schönborn said that when he agreed to be the president of the congress, he was at first skeptical. He said that as he became more involved, however, he began to quickly understand the importance of the Divine Mercy message. At that point, he said he poured his energies into organizing the international gathering (April 2-6), which he termed a great success: “I believe the Lord has blessed this event. I thank the Lord for leading us on this beautiful road.”

The message of Divine Mercy St. Faustina received from Jesus in private revelation “added nothing new,” the Cardinal said. Rather, the message “presents the Gospel in its pure form” in a manner conducive for contemporary understanding. He said the Church recognizes the value of private revelation for that very purpose. Such revelation can help guide people to the truth in specific situations at precise moments of time. Divine Mercy, Cardinal Schönborn said, is undoubtedly the message for out time.

“It is important for us always to keep our eyes on Jesus,” the Cardinal said. “The greatest school of The Divine Mercy is Jesus Himself. That’s what we have learned this week. Jesus IS mercy.”