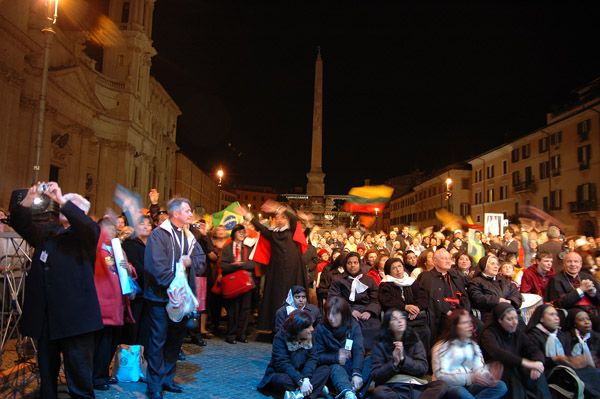 What Were the Lessons Learned from the First World Apostolic Congress on Mercy?

On the eve of the closing of the first-ever World Apostolic Congress on Mercy, Rome’s famous Piazza Novona reverberated with music, prayer, testimonies, and a lingering question: What next?

That is, with their hearts afire with the flames of mercy, what will the congress participants do once the congress ends? It was a question on the minds of many of the thousands of people from dozens of nations who gathered at the end of Day 4 with a Missionary Festival in the heart of ancient Rome. The answers are manifold.

They will lead by example.

“We have to be witnesses of Divine Mercy in all of our actions, big and small, every single day,” said Rasa Vyswiauskiene, of Lithunaia. “This is what this congress has placed in my heart.”

They will seek to bring happiness to others.

“We are called to see the face of Christ in the least among us, so I will serve others, because serving others is what brings true happiness,” says Rich Rita of Bosnia.

They will love their enemies.

“We know this message of Divine Mercy can transform hearts. When it transforms hearts, it transforms lives,” said Mikaela Sin, one of 50 South Koreans who came to the congress. “For us in South Korea, we plan to ignite the faith in our own communities, and we pray especially for the reunification of Korean, and that can only happen through extending God’s mercy to others.”

They will walk in faith, knowing that Christ is looking out for them.

“We must make room for Him in our lives and be witnesses as to why others should do the same,” said Antonella Laurenza of Rome. “Christ is not an image on a piece of paper. He is real. He is with us, and we must keep Him with us so we can follow the right way through many obstacles. That’s what I take from this week.”

They will proselytize through words and by example.

“We need mercy. The world needs mercy. I’m prepared to give this message to everyone,” said Michael Miahesh, an Indian native who lives in France.

They will strengthen themselves in the faith.

“Mercy has to be practical, concrete,” said Marko Komparich of Croatia. “It’s not just something you think or something you feel. Saint Faustina teaches us that we can have a personal encounter with Jesus, and that’s what this is about. We can know Him.”

They will speak His name.

“I was saved by Divine Mercy,” said John Greer of Ireland. “I suffered from depression to the point where two-and-a-half years ago I tried to kill myself. Through the prayers of my wife, Christ healed me. I cannot literally have a negative thought anymore. This congress has convinced me that I need to do Christ’s work and help people who suffer from depression. Something is coming from all this.”

They will urge others to attend the upcoming congresses in their own country.

“I’m going to go back home and tell absolutely everybody that they need to go to the next Congress,” said Erin von Uffel, of Cold Spring Harbor, N.Y. “God wants to shower us all with so many graces.”

They will bring the message of Divine Mercy into their professions.

“Before, I had an intuition that Christ wanted me to integrate Divine Mercy into my therapy,” said Leslie, a doctor of psychology from Virgina. “Now it’s no longer just an intuition; it’s without question. At the most basic level, Divine Mercy affirms the dignity of the human person. It orders everything in a world that has become so disordered.”

They will bring it to their classrooms.

“I want to bring the Chaplet of The Divine Mercy to our campus,” says Sr. Sheila Galligan, IHM, of Immaculata University, in Pennsylvania. “It’s a prayer that can call people to the beauty and wonder of the cross. It’s brief. It’s densely compact, and most of all, John Paul II promoted it, and he’s my man.”

They will change the world.