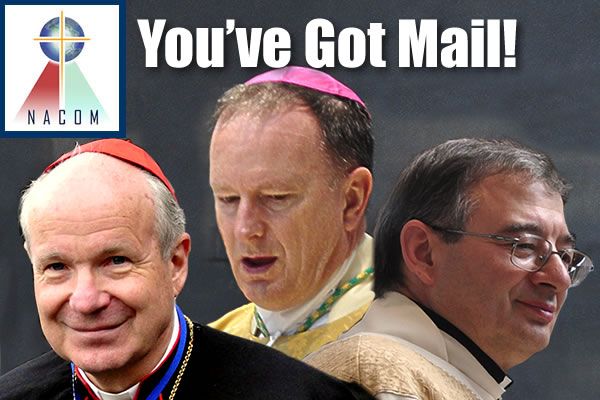 A regional North American Congress on Mercy (NACOM) was held from April 24-26 in the Cathedral of Christ the Oakland, California, bringing together apostles and friends of the Divine Mercy from across the continent. Here, we share some letters to the Congress participants from Cardinal Christoph Schoenborn, the president of the World Apostolic Congress on Mercy; Most Rev. Michael Barber, SJ, the bishop of Oakland who invited the NACOM to his cathedral; and the Very Rev. Kazimierz Chwalek, MIC, provincial superior of the Marian Fathers in the United States and Argentina.

Dear Brothers and Sisters in Christ, Dear participants of the Regional North American Congress on Mercy,

How prophetic were the words of St. John Paul II when he spoke before the vast crowd gathered in Krakow:

“How greatly today’s world needs God’s mercy! In every continent, from the depth of human suffering, a cry for mercy seems to rise up. Where hatred and the thirst for revenge dominate, where war brings suffering and death to the innocent, there the grace of mercy is needed in order to settle human minds and hearts and to bring about peace. Wherever, respect for life and human dignity are lacking, there is need of God’s merciful love, in whose light we see the inexpressible value of every human being. Mercy is needed in order to ensure that every injustice in the world will come to an end in the splendor of truth” (John Paul II, Homily, Krakow, 17 August 2002).

“The Church of our time … must become more motivated and profoundly conscious of the need to bear witness in her whole mission to God’s mercy” (see DM 12). The Church should announce the truth (the true face of God and the true face of man), in a constant articulation to mercy and justice (see 1 Co 8:1-3). Only merciful love is credible and without it, one cannot tell the truth about God without betraying Him. In this way, every disposition of the Church would pass through the demanding filter of a merciful attitude. Becoming ever more perfect in mercy would always be the Church’s goal. The encounter with the God of Mercy becomes our mission. The encounter with the merciful Jesus converts the hearts and makes them missionary in their turn (kerygma). By focusing on these encounters the pastoral care of the Church (diakonia) can be transformed. It is mercy that opens the way to a true relationship with God in the Spirit. It is mercy that leads us to live a more authentic communion with each other.

My wish and prayer is that this Apostolic Congress on Mercy may help Christians rediscover in themselves more deeply their missionary identity as prophets of mercy (see Hos. 6:6), as priests of mercy (see Rom. 12:l; Heb. 2:17) and as kings of mercy through their Baptism and the Eucharist.

To the faithful attending the North American Congress on Mercy at the Cathedral of Christ the Light, Oakland, California April 24-26, 2015

My dear brother and sisters, On behalf of the priests, religious men and women and all the faithful of our Diocese, it is my honor and pleasure to extend our warmest welcome to each one of you.

As we gather to celebrate God’s infinite mercy, revealed to us by His Only Begotten Son, Risen from the dead, I would like to invite you to take this opportunity not only to reflect on the many graces we have received from His mercy, but also on the fact that we are all called to be instruments of that same mercy in the lives of others.

Mercy implies, in many ways, reaching out. That is exactly what God the Father did: to show us his mercy, he sent us His most precious treasure, His Son, who became man to share our sufferings and hopes, our struggles and joys. Christ died and rose from the dead for you and for me. God reached out to the extremes of our human existence to redeem us. Moreover, he continues reaching out to us through the Sacraments, especially the Eucharist, making His mercy present and available for all those who believe.

Moreover, God is calling us to be instruments of that same mercy. And that is an essential part of our faith. The corporal and spiritual works of mercy that have been taught in our Catechesis generation after generation are the concrete expressions of that mercy flowing from God to us, and, through us, to the lives of those brothers and sisters most in need.

When we, Christians, feed the hungry, clothe the naked, bury the dead, counsel the doubtful, forgive offenses, comfort the afflicted, pray for the living and the dead, or practice any other work of mercy, we can say that we are not just doing philanthropy, we are changing the world through God’s love and mercy. Pope Francis pointed out that during his first Angelus, on March 2013: “Mercy changes the world. A bit of mercy makes the world less cold and more just. We need to understand God’s mercy well…”

I pray that this Congress will help us all to be agents of the true mercy of God “to the end of time”.

The Most Reverend Michael C. Barber, SJ
Bishop of Oakland

On behalf of the Regional NACOM organizers, we would like to express our deepest appreciation to the following people and organizations that have made this wonderful weekend of mercy possible:

First and foremost, we thank His Excellency Michael Barber, SJ, Bishop of Oakland, CA, and Fr. Alexander Castillo, his secretary, as well as Fr. Carl Arcosa, Divine Mercy Coordinator for the Diocese of Oakland. All of you have been tremendous hosts for this regional North American Congress on Mercy, and we truly appreciate your invitation to the Marian Fathers of the Immaculate Conception to be your co-hosts for this event at the cathedral.

We also thank Rev. Jay Matthews, Monica Salcedo, and the entire staff of the Cathedral of Christ the Light; Very Reverend George Mockel, Vicar General of the Diocese of Oakland; John Erick Villa and all of the Oakland seminarians; the members of the Divine Mercy planning committee for the Diocese of Oakland; all of the parish volunteers from Good Shepherd in Pittsburg, St. Joan of Arc in San Ramon, Immaculate Heart of Mary in Brentwood, St. Agnes in Concord, St. Anne’s in Walnut Creek, St. Francis of Assisi in Concord, St. Anne’s in Union City, Holy Spirit in Fremont, and Holy Rosary in Antioch; all of the diocesan and religious priests of Oakland who heard confessions; all of the Marians — priests, brothers and seminarians, especially Br. Kevin Gregorek, MIC, my personal representative, and postulant Jason Hilliker, his assistant; the Marian Fathers’ Divine Mercy Apostolates; Mary Kay Volpone at the National Shrine of Divine Mercy, the staff of the Marian Helpers Center in Stockbridge, Massachusetts, and the members of the Association of Marian Helpers; all of the speakers, presenters and musicians who traveled from around the country to share their experiences in living the message of God’s mercy.

We are deeply grateful to Cardinal Schönborn, President of the World Apostolic Congress on Mercy and to Fr. Patrice Chocholski, its Secretary General. Finally, our profound gratitude goes to the Holy Father, Pope Francis, who has enthusiastically taken up the mantle of mercy from St. John Paul II and Pope Emeritus Benedict XVI to become our beloved “Mercy Pope.”

With best wishes and blessings in our Merciful Lord!