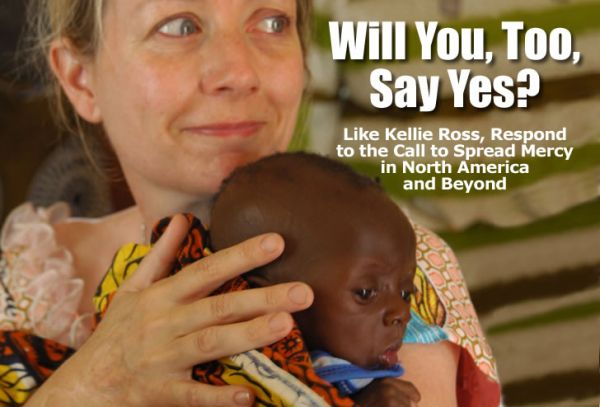 “She’s dying,” said Kellie Ross, of this baby girl in June in a hospital in Bouake, the Ivory Coast. Kellie learned the mother could not produce milk to nurse her baby and had no money for food. “This is why we are called to come to the Ivory Coast,” said Kellie of her group, Missionaries of Our Lady of Divine Mercy, which was touring the west African country. 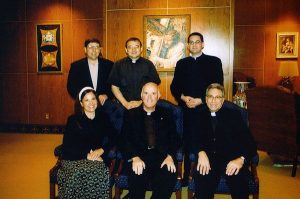 Screams, wails, and whimpers ricochet off the concrete floor in a walled-off compound where the mentally ill are quarantined. The place is filthy. Bodies that have no reason to get up, stay down.

Kellie Ross is on bended knee speaking with a boy — one of dozens of tragic cases she encounters during a 12-day Divine Mercy mission in June in west Africa. He’s 8 years old and completely out of place here among the older, clearly sick, patients. His ailment? Epilepsy, a common chronic neurological disorder that’s easily treated and that many children grow out of.

But here in the Ivory Coast (Cote d’Ivoire), where Kellie and her group of missionaries are spreading the message of mercy in a poor, war-torn land, there are no medications available for epilepsy. That means that this boy’s epilepsy is cause for him to be kept quarantined with the mentally ill in dark rooms, on hard floors, surrounded by bare walls, and amidst the horror of screams, of wails, and of whimpers.

Kellie is hugging him. Tearfully, she kisses the disfigured flesh where his left hand used to be, now burnt to the nub after he fell into a fire during a recent seizure.

‘Mercy: Our Hope’
What’s a prayerful wife, mother, and small-town Catholic humanitarian from the suburbs of Virginia doing here in the Ivory Coast, 7,000 miles from home?

Inspired by Marian Helper magazine back in 2005, Kellie is following the Lord’s call to spread His Divine Mercy. Her response to His call — saying yes — is what organizers for the upcoming North American Congress on Mercy (NACOM) on Nov. 14-15 hope to duplicate a hundredfold.

With NACOM — two days of talks, celebration, and worship at the Basilica of the National Shrine of the Immaculate Conception in Washington, D.C. — a “demand” from Christ, and a “mandate” from Rome, will be writ large in North America.

Jesus told St. Faustina, “I demand from you deeds of mercy, which are to arise out of love for Me. You are to show mercy to your neighbors always and everywhere. You must not shrink from this or try to excuse or absolve yourself from it” (Diary of St. Faustina, 742).

The Holy Father, too, has made mercy a “mandate.” At the conclusion of the World Apostolic Congress on Mercy in April 2008, Pope Benedict XVI told the thousands of Congress participants from all around the world, “Go forth and be witnesses of God’s mercy, a source of hope for every person and for the whole world.”

“The Holy Father inspired all of us to bring the message of mercy to our own lands,” says Fr. Matthew Mauriello, president and coordinator for NACOM. “So this November, in Washington, D.C., we will carry that spark from Rome to our own country, much in the same way the Olympic torch is carried from country to country. We will take that spark from Rome and bring it back to our own dioceses, our own parishes, and our own homes.”

The Congress’ theme — and timing — couldn’t be more appropriate. In a land reeling from a financial and moral crisis, where families are struggling and fearful, amidst the fighting of two foreign wars, the episcopal advisor to NACOM, the Most Reverend William E. Lori, Bishop of the Diocese of Bridgeport, Conn., has declared that the theme for the Congress will be “Mercy: Our Hope.”

“The Congress will help people come to know God as a God of mercy who can cure us from our brokenness, our sinfulness, and our fears,” says Fr. Kazimierz Chwalek, MIC, Marian director of evangelization and development and Congress vice president. “We will share how He wants us to do the same for each other — to carry each others’ crosses — in a world in desperate need of His profound gift of mercy.

“By giving to others out of our love for God,” he says, “we create opportunities for God’s greatest miracles — for others and for ourselves.”

To help others experience the miracle of God’s mercy at NACOM, Fr. Kaz says the Marians are organizing a bus pilgrimage to the Congress, with pickups in Albany, N.Y., and Springfield, Mass. Call 1-800-462-7426 for information.

Mercy for North America
Dynamic speakers will unpack the theme “Mercy: Our Hope” at NACOM. (See the schedule.)

On Saturday morning, Nov. 14, Dr. Scott Hahn, who is renowned for his talks on Scripture and the Catholic faith, will give a presentation on Divine Mercy in Scripture entitled “Lord, Have Mercy.”

Doctor Hahn is a professor of Theology and Scripture at Franciscan University in Steubenville, Ohio. Hahn is author of the bestseller on the Eucharist, The Lamb’s Supper, and many other bestselling books.

Also on Saturday morning, Theresa Bonopartis — who has been involved in post-abortion work and counseling for 20 years — will address the Congress on the topic “Where Mercy Meets Faithfulness,” touching on how God not only healed her from an abortion but radically changed her life.

She is director of Lumina, a post-abortion referral service that operates under the auspices of Good Counsel Homes founded by Christopher Bell and Fr. Benedict Groeschel, CFR.

On Saturday afternoon, Fr. Donald Calloway, MIC, will speak on the topic “The Virgin Mary: Mother and Mediatrix of Mercy.”

The U.S. Vocation Director of the Marians, Fr. Donald is well known for his love of the Blessed Virgin Mary and his dramatic conversion story. He is the author of Purest of All Lilies: The Virgin Mary in the Spirituality of St. Faustina.

Magnifying His Mercy
At the Mercy Congress, Kellie will be among those giving a testimony of mercy — explaining how she has been saying yes to the Lord ever since she found herself leafing through a copy of Marian Helper magazine in 2005.

An article had caught her attention that discussed ways people can help the Marians spread Divine Mercy. The article included an image of The Divine Mercy, showing a magnifying glass over the Heart of Jesus.

Through the group she founded, Missionaries of Our Lady of Divine Mercy, a ministry of Holy Trinity Catholic Church in Bristow, Va., Kellie has radically reordered her life and priorities to magnify the Lord’s mercy.

That became the motivation for her ministry. Her eyes were opened to the suffering around her. Men and women going hungry in Washington, D.C. No excuses. Children in northern Virginia without clothes and food and school supplies. No excuses. People living without God and their souls in jeopardy. No excuses.

These are the people the Missionaries have been serving — thousands of them — through their House of Mercy in Manassas, Va.

“We have to help,” says Kellie. “We cannot keep living under the assumption that other people will help.”

Saying Yes
So in April, when His Excellency Marie-Daniel Dadiet, Archbishop of Korhogo, Cote d’Ivoire, paid an unannounced visit to the House of Mercy during a trip to Washington, D.C., and asked Kellie, “Will you help my people? They are suffering,” there would be no excuses.

In June, the Missionaries toured the Ivory Coast, visiting hospitals, schools, and orphanages. They opened a House of Mercy in Korhogo. They are now organizing cargo containers filled with necessities for the people there.

Why west Africa? Because children have been orphaned. Because 40 percent of the infrastructure of the country was destroyed by the civil war that lasted from 2002-2007.

Kellie said yes to The Divine Mercy. Now, you have a special opportunity at NACOM to say yes to His mercy — the healing balm for our own broken and hurting continent of North America.

Read Felix Carroll’s series on the Missionaries of Our Lady of Divine Mercy’s journey in the Ivory Coast at thedivinemercy.org/Africa.