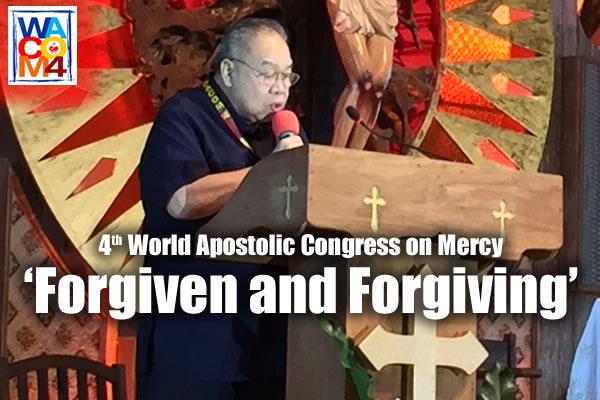 By Melanie Williams (Jan 19, 2017)
January 18, 2017 was the third day of WACOM 4 (the Fourth Apostolic Congress on Mercy) in Manila, Philippines. The events of the day took place at the National Shrine and Parish of St. Padre Pio in Santo, Tomas, Batangas.

Day Three of WACOM 4 focused on “The Church being a Forgiven and Forgiving Community.” The day began with the enthronement of the Divine Mercy image and an image of Our Lady of Mercy. Throughout the day, 120 priests heard confessions at the National Shrine and Parish of St. Padre Pio.

Most Rev. Teodoro Bacani, DD, Bishop Emeritus of Novaliches, talked about “Remembering and Celebrating the Mercy of God as a Forgiven and Forgiving Community”.

Bishop Bacani said that the faithful should celebrate and proclaim the mercy of God with love, forgiveness and reconciliation.

Bishop Bacani also shared a story from his fellow priest whose parish had 40 killed in the drug war of the government.

“My dear brothers and sisters, let me tell you this. I was touched when a fellow priest of mine — in his parish alone, 40 people were killed over the drug issue — said to me, ‘You know what pains me, Bishop? It’s not only those people lost their lives, but if they are sinners and they were killed in their sleep, they had no time to repent. Now they will be condemned, not to jail, but to eternal fire,'” the bishop said.

He also denounced the Oplan Tokhang of the government.

“Today, the Lord in His mercy, He knocks. And when He knocks he brings grace. … Today, we in the Philippines, we also get knocks. We call it Tokhang. But this Tokhang is not a bringer of grace. It is a bringer of death,” the bishop said.

Closing his talk, Bishop Bacani quoted Pope Francis: “There is no limit to divine mercy, offered to everyone.”