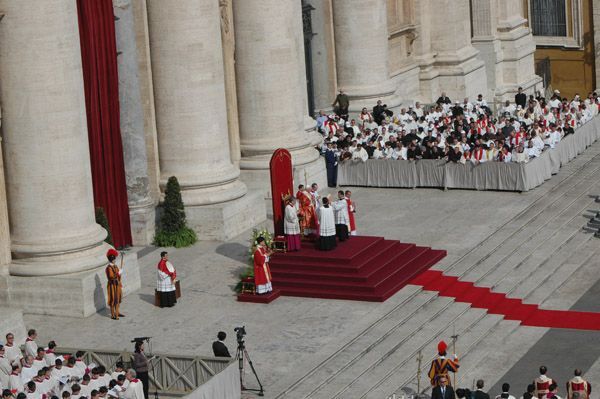 By Felix Carroll (Apr 3, 2008)
If there was any confusion at all about the focus of the World Apostolic Congress on Mercy, Pope Benedict XVI quickly dispelled it during the opening Mass in St. Peter’s Square on Wednesday morning.

The first-ever congress on mercy would focus not on mercy in general, but Divine Mercy specifically. The Holy Father himself referred to the Congress as the “World Apostolic Congress on Divine Mercy.”

It’s not just a matter of semantics. The message of Divine Mercy, as revealed to St. Faustina in the 1930s, sheds light on the nature of God as Merciful Father. It calls on the world to trust in Jesus, to receive His mercy, and to share that mercy with the world through our actions. It’s a message that Pope John Paul II believed was particularly suited to our times.

In his homily, delivered before more than 40,000 people, Pope Benedict XVI set the stage for the five-day world congress, tying it in with the Pontificate of John Paul II, known as the “Great Mercy Pope,” who tirelessly promoted the message of God’s mercy and who canonized St. Faustina, whose revelations have sparked the modern Divine Mercy movement.

“In fact, only Divine Mercy is capable of limiting evil; only God’s all-powerful love can overcome the arrogance of the wicked, and the destructive power of selfishness and hatred,” the Holy Father said in his homily.

The opening Mass was celebrated for the soul of the Servant of God Pope John Paul II, on the third anniversary of the Polish Pontiff’s death. Pope John Paul II spoke of Divine Mercy as his special calling as Pope.

“I direct a particular thought to the participants of the first World Congress on Divine Mercy, which begins today and which intends to delve more deeply into [Pope John Paul’s] rich magisterium on this subject,” Pope Benedict said. “The message of God, he himself said, is a key to the privileged reading of his pontificate. He wanted the message of the merciful love of God to reach all humanity, and he exhorted the faithful to be witnesses of it. For this reason, he wished to elevate to the honor of the altars Sr. Faustina Kowalska, the humble sister who became, by a mysterious divine design, a prophetic messenger of Divine Mercy.

“Servant of God John Paul II personally knew and experienced the immense tragedies of the 20th century, and for a long time he asked himself what could stem the tide of evil. The answer could not but be in the love of God.”

Father Seraphim Michalenko, MIC, who served as vice-postulator for St. Faustina’s canonization cause, called the opening Mass “astounding” — not only because it echoed Pope John Paul’s exhortation that Divine Mercy is the message for our times, but because so many people in the square were clearly drawn by their love for the message and devotion of Divine Mercy.

Indeed, many carried Divine Mercy images and pictures of St. Faustina. And when the words in Italian for “Divine Mercy” were spoken in the Holy Father’s homily, the crowd cheered.

“It shows how universal the acceptance of this message is,” said Fr. Seraphim. “It’s vastly greater than people can imagine.”

The aim of the five-day congress is to bring the message of mercy into the daily life of the Church and the world. About 200 delegations from around the world, including clergy and laity and people of other faiths, are taking part. Throughout the week, the congress is featuring prayer, plenary sessions, ecumenical testimonies and evangelization throughout Rome.

Susan Wilson, a member of a Divine Mercy cenacle in Salem, Oregon, was drawn to the congress after she experienced a conversion in 2000, on the day of St. Faustina’s canonization.

“I believe this congress is the second most important event in human history, second to the Paschal Mystery of Christ,” she said. “From this point on we are all being called to spread the message of Divine Mercy. We’ll be heralds of His Second Coming, as St. Faustina was. This congress launches this message into a world event.”

“It’s such an important event,” said Ellen Jonah of Ghana, who was wearing a dress that had the face of St. Faustina and The Divine Mercy image printed upon it. “There is so much pain in the world, so many families torn apart. We’ve come here to learn more about Divine Mercy so that we can bring the message back to our communities.”

“We’re those vessels of mercy that are being filled up this week so that we may bring it back and share God’s mercy with all,” said Lee Bowers of Texas.

“Christ came and gave a human face to God’s mercy,” said Olga Blake, a nurse from Bronx, N.Y., who is participating in the congress. “So we must take that mercy and, in turn, be merciful to others. This is the only way the world will heal itself.”

In his homily, the Holy Father asked John Paul II “to continue to intercede from heaven for each of us, and particularly for me whom Providence has called to take up his priceless spiritual legacy.

“May the Church,” he said, “following his teaching and example, continue in her evangelizing mission faithfully and without compromise, tirelessly spreading Christ’s merciful love, source of true peace for the whole world.”