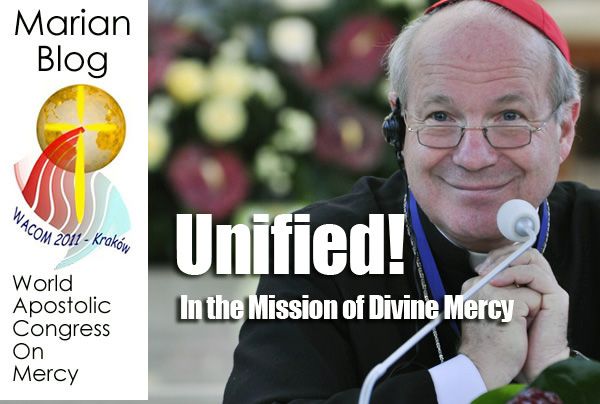 Cardinal Christoph Schönborn of Austria, president of the Mercy Congress, is clearly pleased. 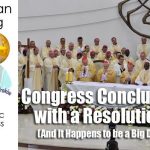 The five-day World Apostolic Congress on Mercy concluded today with an entrustment of the world to Divine Mercy here in Lagiewniki, Poland — the place where St. Faustina received her Divine Mercy revelations.

Jesus promised St. Faustina that from Poland “will come forth the spark that will prepare the world for My final coming” (Diary of St. Faustina, 1732). Jesus has honored this promise by lighting upon her soil the “spark” through His revelations to St. Faustina.

Through deep, long breaths — or sighs of relief — from millions around the world, that spark 70 years ago has grown into flames that have brought the light of God into dark times.

Now, let’s focus on today. We’ve got some things to talk about …

The author, Fr. Steven Payne, OCD, wrote in 2002 about this obscure and humble nun. He describes her “limited education,” saying she “never wrote a treatise or published an article,” and what she did write displayed an “imperfect literary style.” Yet, he writes, no one would have guessed that she “would soon take the world by storm and go on to become the most popular saint of modern times — ranked alongside Augustine and Thomas Aquinas.”

If you guessed St. Faustina, you’re incorrect. Payne is writing about the 19th century French cloistered Carmelite, St. Therese of Lisieux, in his book St. Therese of Lisieux: Doctor of the Universal Church. But it’s amazing to consider the similarities between the two saints — not just in terms of their backgrounds, but also the impact they each have made upon the Church and the world.

At the conclusion of the second World Apostolic Congress on Mercy today, Cardinal Christoph Schönborn of Austria, president of the Mercy Congress, called for St. Faustina — this lowly Polish nun who barely had three years of schooling — to join the ranks of St. Therese and only 32 other saints who have been declared Doctors of the Universal Church.

More to the point, His Eminence announced that on behalf of the Congress, a formal request has been made to Pope Benedict XVI to bestow upon St. Faustina the distinguished ecclesiastical title of Doctor of the Church. Signatories of the request include prelates here at the Congress — Cardinals Stanisław Dziwisz, Audrys Juozas Backis, Stanisław Ryłko, Joseph Zen, Franciszek Macharski, and Philippe Xavier Barbarin.

Congress organizers, Cardinal Schonborn and Cardinal Stanislaw Dziwisz, have pushed for drafting this formal request believing St. Faustina’s teachings of the mystery of God’s mercy — and the influence that the her Diary has exerted all over the world — make her eminently qualify for the title.

Only the Pope has the authority to declare someone a Doctor of the Church, Cardinal Schonborn noted. It’s not clear if Pope Benedict XVI has any plans to bestow St. Faustina with the title, but he’s proven to be a strong advocate of St. Faustina’s revelations, following in the footsteps of his predecessor, Blessed John Paul II.

Pope Benedict XVI, after praying the Angelus Sunday, addressed a message the Mercy Congress, making reference to the Congress’ theme and to St. Faustina. In a translation posted by zenit.org, he said, “Dearly beloved, reinforce your trust in the Lord through common reflection and prayer so that you will take effectively to the world the joyful message that ‘mercy is the source of hope.'”

Saint Therese was the last woman to be given the title, and that was in 1997, under Pope John Paul II.

Maybe Cardinal Schonborn was giving a big hint of his intentions on Day One of the Congress when his talk veered entirely from the one printed in the original “Congress Book.” He was scheduled to speak of the history and development of the Mercy Congresses. Instead, he spoke of the spirituality St. Therese.

All week long, attendees and clergy speculated whether the topic would be addressed during the Congress

What does it mean to be a Doctor of the Universal Church? Pope John Paul II described a Church Doctor as one whose writings not only conform with revealed truth, but that also shed “new light on the mysteries of the faith.”

For instance, St. Therese sheds light upon the “little way” — of seeking holiness in the ordinary and the everyday. Many say that St. Faustina, whose Diary includes a series of personal revelations she received from Jesus Christ in the 1930s, sheds light on the progress of the mystical life of the soul and gives an unparalleled understanding into the mystery of Divine Mercy.

Cardinal Schonborn’s announcement was met with a loud cheers today in the standing-room only Basilica of Divine Mercy, by the thousands of Congress attendees who bear witness to the profound influence the Diary of St. Faustina is having on the life and teaching of the Church.

“Her Diary, written in simple language, helps us to comprehend how God proceeds with souls,” says Fr. Seraphim Michalenko, MIC, who served as vice-postulator of St. Faustina’s canonization cause. “And it gives us a richer understanding of the relationship between mercy and love and the notion of merciful love as the source and ultimate reason for the whole of salvation.”

An Addendum:
Father Patrice Chocholski of Lyon, France, general secretary of the Congress, just stepped in the hotel lobby [it’s 9:30 p.m., and the hotel next to the sisters’ convent is the only place with WiFi]. He sat with me. I asked him about this proposal of St. Faustina being named a Doctor of the Church. Here’s what he has to say :

Her being named a doctor will be a good way to discover what is universal and deep in her teachings. It will be a work for ourselves to understand her better and to understand God better.

When Jesus said through her to “speak of My mercy” to everybody, by her becoming a Doctor will help build a new paradigm for the new millennium. We are in a new world, a new age, and we need to help a hurting world understand God. Of course, He’s the Alpha and the Omega, but [through St. Faustina and the message of The Divine Mercy] we can discover God’s face as the face of God and the face of man, and this is a project for all of humanity: to grow to become His face in the world.”

1.) Entrustment of the world to The Divine Mercy. Check.

2.) The request from this Congress to the Holy Father asking that St. Faustina be named a doctor of the Church. Check.

But there are three more announcements.

3.) By the grace of God, there will be a third World Apostolic Congress on Mercy, and more than likely it will take place in Bogota, Columbia. In the meantime, there’s talk of another gathering in Krakow. No dates have been set.

(“We’ve received a very serious invitation from the [Conference of Catholic] Bishops in Columbia,” Cardinal Schonborn said last evening in a meeting of Congress organizers, “and I think we should really consider this … I think this is where we should consider.”)

4.) Cardinal Stanislaw Dziwisz announced plans to found an international academy in Krakow that will serve for theological and pastoral formation on Divine Mercy.

5) Inspired by the Marians, through the person of Fr. Kazimierz Chwalek, MIC (the Marians’ Provincial Superior in the United States and Argentina), Cardinal Schonborn announced that on behalf of the Congress representatives, a letter has been sent to the Vatican proposing that the Divine Mercy message be placed at the center of a “new Evangelization” call from the Holy Father.

Pope Benedict XVI has chosen “new evangelization” as the theme for the next world Synod of Bishops in Fall 2012. He said the theme reflects a need to “re-evangelize in countries where Christian faith and practice have declined, and where people have even moved away from the Church.”

Proposals for topics must be submitted by November. This proposal will be sent in time for consideration.

“This is an amazing achievement from this Congress,” says Fr. Patrice.

It’s one achievement among many, he notes.

“I really rejoice that the Bishops and Cardinals have reached an agreement on a common project,” he said, referring not only to the Synod, but the institution of World Apostolic Congresses on Mercy as a whole, including the dozens of national Congresses held in the last two years.

“We are agreeing as a Church the need to present Divine Mercy to the world,” Fr. Patrice said, “otherwise people are afraid of God or have no idea who God is. … This is a communion, a communion of Bishops and Cardinals in agreement that Divine Mercy is an official mission of the Church — not just of devotional groups, who are very important, not just certain parishes, but the whole Church.

Here another quote from Fr. Patrice during our hotel lobby interview:

Allow me to share some thoughts from Fr. Kaz at the conclusion of the Congress:

He says the effects of this historic gathering cannot be underestimated:

Hearing the talks, celebrating, singing — you’re renewed in the faith. You see the people here, and you see how they’re nourished. They’re filled with fire. The fire has been set, and now its light is reaching more and more hearts in more and more places around the world. Divine Mercy is a grassroots movement, as Fr. Seraphim says. Congress attendees have so much joy, and it shows, and their joy is contagious. When you see their enthusiasm and joy, that brings encouragement and hope to others, and this consoling message exponentially grows from there.

I mention to Fr. Kaz how sometimes Divine Mercy gatherings seem like “preaching to the choir.” And if that’s the case, the choir is getting bigger.

Yes. It’s no longer a little tiny choir. It’s a multitude of choirs singing everyplace, and these choirs are multiplying …

As for the Congress and the new initiatives it has spawned (re: the Synod and Faustina/Doctor of the Church) “it’s a dream come true for me,” says Fr. Kaz. With regards to the Marian Congregation, which began spreading the Divine Mercy message and devotion in 1941, Fr. Kaz says, “God is blessing us. He has been inspiring us to inspire others.”

For us, we sense the heart of John Paul; we sense the hearts of Cardinals Schonborn and Dziwisz. Their happiness, inspiration and hope comes from the same Source. When you feel God’s love in your heart and know that same love is present in another person’s heart, this is how you create the community of the faithful with a common love and common mission.

Father Kaz also notes the great efforts of the Sisters from St. Faustina’s congregation, the Congregation of Sisters of Our Lady of Mercy. He suggests a reason why the Lord chose a nun from that Congregation through which to spread the Divine Mercy message and devotion:

The Sisters’ mission since their founding has been to minister to young women who have become stuck in a life of moral brokenness. The Sisters have had the very difficult task to help them overcome their spiritual, moral and social conditions. I think this may be why God chose them. This is the paradigm of their mission: To show these young women the heart, to love them. There’s no condemning them; only loving them. It’s love that makes a person whole. There’s no other way. There’s no spiritual healing outside of love. If you love, love heals, and God’s love heals completely. He knows us. He knows we’re messed up. “Yes, but I love you,” He says. “I want to bring you back.” And once you’re brought back, you realize you are broken because you know yourself now, and you know God and His love for you. You know that you are forgiven, you’re loved. To discover God is to discover love, healing and wholeness.

Look who else is at the Congress. Meet the Marians’ dear friend, Purisima Narvaez: