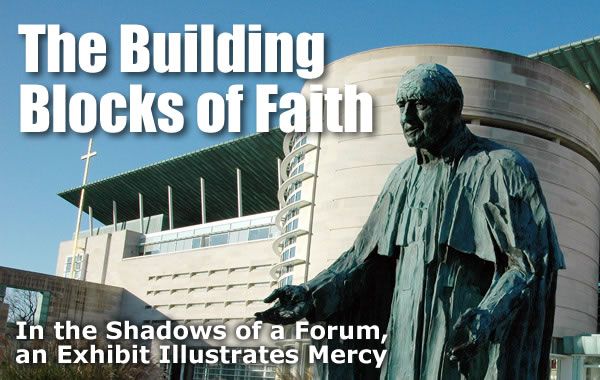 By Dan Valenti (Nov 13, 2009)
In one sense, one of the most memorable presentations at the Divine Mercy Networking Forum on Friday, Nov. 13, came not from a person but from a building.

The bricks and mortar that is the John Paul II Cultural Center in Washington, D.C., itself spoke a message of mercy. It did this through its architecture and in its exhibits.

Architecture is the art of cementing into physical form a building’s conceptual theme and its function. The theme driving the center is the controlling idea of Pope John Paul II’s papacy: God’s mercy for humankind. The function of the building serves as both a repository for and an expression of that theme.

A feeling of goodness exudes from a peculiarly enticing blend of intimacy and grand scale. Lots of glass means lots of light, the perfect symbol of God. High ceilings invoke the interior spaces of grand basilicas. A gradual marble walkway sloped to a subtle incline takes the place of stairs, signifying the gradual process of walking the spiritual journey. “Steps” are not what one walks on to ascend but the action one takes to reach the top.

Other Faiths, Same Destination
Of the many exhibits, one stands out, on the lower level, devoted to the religions of other faiths. The world’s major faiths are presented in a respectful treatment, each shown as alternate paths yet viable to the same ultimate reality of God.

1. The reality of a higher power
2. Surrender to the higher power
3. Reciprocity, summed up in the Golden Rule (here we find the need to show mercy to others)
4. Worship
5. The human spirit, that is, the concept of the soul
6. Other worlds, or a belief that humans can move from one world to another, for example, from earth to heaven or moving through the stages of reincarnation to nirvana.
7. Paths to God, or the notion that human nature can be changed for the better through the teachings of faith.

The display presents a refreshing, multicultural, interfaith statement on the powerful drive in all humans to find their way from the tangential experience of life on earth to the absolute realm of a Supreme Being. The destination is one. The paths are many. The journey is to Home.

As Terry Muzones, one of the presenters in the Divine Mercy Networking Forum put it, “If we have God in our hearts, He leads us to where we are going,” that is, where He wants us to go, ultimately, back to Him.