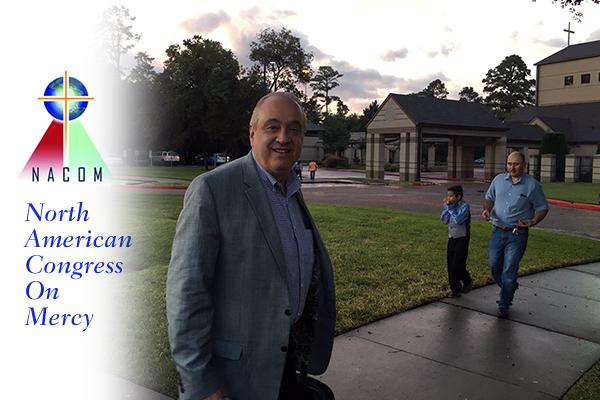 By Chris Sparks (Oct 20, 2016)
Texas has 10 percent of the nation’s Catholics, observed Alan Napleton, founder of the Catholic Marketing Network (CMN) and one of the organizers of the second North American Congress on Mercy (NACOM II).

That’s why the Dallas-based Catholic businessman was so eager to see NACOM II come to his state of 20-plus years.

“This is the time of mercy,” said Napleton. “Of course, this is the great Jubilee Year of Mercy. People will come for a deepening knowledge of the message of Divine Mercy, because we have really gathered the experts on this. I think they’ll be able to interiorize the message so it’ll mean a lot for their spiritual life.

“This is the message for our times. These are troubled times, and the message of Divine Mercy, of God’s unlimited mercy, is very consoling, very comforting, and very timely.”

Congress speakers; Congress organizers from the Marian Fathers of the Immaculate Conception, Napleton’s Catholic Marketing Network, and Ken Zammit’s Fullness of Truth apostolate; and volunteers from Prince of Peace Catholic Community in Houston, Texas, the host of NACOM II, all are hard at work making final preparations for the Congress. As they labor, it’s worth taking a look back at the history of the Congresses.

Inspired by St. John Paul II and in particular by his homily during the prayer of entrustment of the world to Divine Mercy in Krakow in 2002, Cardinal Christoph Schönborn of Vienna, Austria, began to promote the “message of God’s merciful love so that it be made known to all the peoples of the world.”

For this purpose, Cardinal Schönborn formed an apostolic group called the “Missionaries of Mercy,” whose task was to promote the message of God’s merciful love to all the peoples of the earth and to pass on the the “spark,” lighted by God’s grace, which will prepare the world for Christ’s final coming.

The Missionaries of Mercy and all the promoters of Divine Mercy from around the world were invited to gather in Krakow in August 2005 for a conference retreat. There, the participants requested the establishment of a World Apostolic Congress on Mercy (WACOM). Cardinal Schönborn received Pope Benedict XVI’s approval in 2006.

The USCCB was among the first episcopal conferences to express their support through its then-president, Bishop William Skylstad.

The first World Apostolic Congress on Mercy was held in Rome in 2008, and personally addressed by Pope Benedict XVI, who gave the Congress participants a “mercy mandate.”

The second was held in Krakow in 2011, hosted by Cardinal Stanislaus Dziwisz, the former private secretary to St. John Paul II. The third, in Bogota, Colombia, in 2014, hosted by Cardinal Ruben Salazar. The fourth WACOM will take place in the Philippines on January 16-20, 2017.

All official local and regional Congresses are affiliated with WACOM. This is the second NACOM. The first was held in Washington, D.C., at the Basilica of the National Shrine of the Immaculate Conception in 2009. A regional NACOM was held in Oakland, California, at the Cathedral of Christ the Light in 2015.

You can still register for the Congress! Visit mercycongress.org for more information.