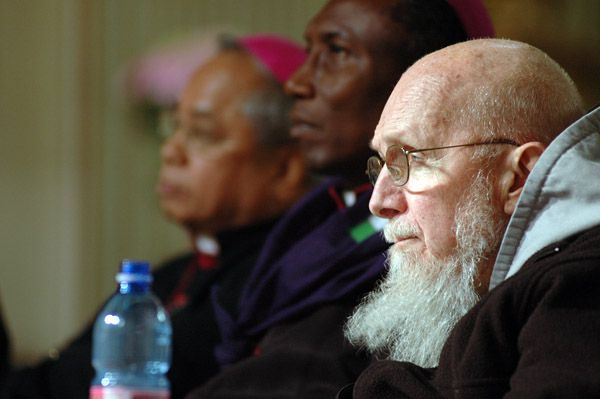 Guest speaker Fr. Benedict Groeschel, CFR, explained that the elements of the message of Divine Mercy are necessary to our health and well-being.

What Happens When Divine Mercy and Psychotherapy Meet?

Consider this: Christ told the great prophet of Divine Mercy, St. Maria Faustina, in one of a series of revelations in the 1930s, “Mankind will not have peace until it turns with trust to My mercy” (Diary of St. Faustina, 300).

Now consider this: The revelations of St. Faustina occurred at a time when mankind was just beginning to focus on psychological brokenness.

Now imagine this: What if Divine Mercy and the field of psychotherapy became partners in healing the world?

This isn’t a pipe dream, or the wishful thinking of a bunch of Divine Mercy devotees who are allowing the beauty of the Eternal City or the richness of the Catholic Faith to cloud their good judgment during a five-day congress on mercy. This is actually happening. Today. Right now.

On Day 2 of the World Apostolic Congress on Mercy in Rome, Fr. Benedict Groeschel,CFR, dropped a proverbial bomb, in a talk titled “Brokenness and the Human Person and the Healing Power of God’s Mercy,” to a packed audience at Our Lady of Angels in Rome. He declared that a “simple peasant girl” from Poland named Helen Kowalska, now known to the world as St. Faustina (1905-38), made “a remarkable contribution to the new solution” to the problems that plague humanity.

He traced the arc of the field of psychotherapy in the 20th century and spoke of the “astounding … almost miraculous” changes now afoot, changes which “fit in with Divine Mercy.”

In a nutshell: Love, forgiveness, and mercy, all touchstones of the message of Divine Mercy, are not only good traits to have and to practice, but they prove necessary to our health and well-being.

But let’s back up. In the 1980s, the first great crop of psychologists and psychiatrists began retiring. These were the men and women who spent careers treating depression, anxiety, self-hate, guilt, fear, and other problems. One of them, a Jewish psychologist named Dr. Allen Beck, asked the question, “Did we do anything? Did anyone get better?”

“The question contained the answer,” said Fr. Groeschel, “and the answer was, ‘We didn’t do very much.’

“I was aware of this when I was studying psychology at Columbia,” said Fr. Groeschel. “I said to myself, the purpose [of psychotherapy] seems to be to bring people from misery to mere unhappiness. The goal was unhappiness. In the psychiatric world, if you’re really happy, they think you’re nuts.”

For years, the treatment, he said, focused on guilt, anxiety, self-hate, hostility, but Dr. Beck asked, “Why don’t we straighten out our thinking?” Before this time, most in the field followed more or less the theories of Sigmund Freud, an atheist. His method, said Fr. Groeschel, was to “get rid of your repressed feelings, especially your repressed hatred of your mother and father. That was the big theory. Freud did hate his mother and father, but that didn’t mean everybody else did. Beck said straighten out your feelings.”

After that, said Fr. Groeschel, another psychologist, Dr. Martin Seligman, got an incredible realization. Seligman was president of the American Psychological Association, “the most unreligious organization this side of the Russian Secret Police,” said Fr. Groeschel. One morning, Seligman’s young daughter spilled a glass of orange juice, and, as the story goes, Seligman yelled at her, “Why don’t you be careful!” His daughter responded, “Why don’t you be nice?”

Her response startled him. Seligman thought, “Be kind. Be nice.”

From that event sprung a whole new reform of modern psychotherapy called “Positive Psychology,” the psychology of virtue.

And until that point, the word virtue “hadn’t been heard in a hundred years” in the field of psychotherapy, said Fr. Groeschel. “The theory was that people, in order to get better, need to practice the certain virtues that are lacking in their lives,” he said.

Virtues such as forgiveness, love, and mercy.

Now, consider the Diary of St. Faustina, where she recorded her mystical experiences with Christ. In it, this uneducated Polish nun provides a veritable prescription for the age. At one point, she includes what she calls conversations of a Merciful God with a sinful soul, a despairing soul, a suffering soul, and a soul striving after perfection. For instance, one section reads:

Soul: Lord, I doubt that You will pardon my numerous sins; my misery fills me with fright.

Jesus: My mercy is greater than your sins and those of the entire world. Who can measure the extent of My goodness? For you I descended from heaven to earth; for you I allowed Myself to be nailed to the cross; for you I let My Sacred Heart be pierced with a lance, thus opening wide the source of mercy for you. Come, then, with trust to draw graces from this fountain. I never reject a contrite heart. Your misery has disappeared in the depths of My mercy. Do not argue with Me about your wretchedness. You will give Me pleasure if you hand over to Me all your troubles and griefs. I shall heap upon you the treasures of My grace (1485).

Here, Christ speaks of His forgiveness and of His love, even to the soul on the edge of eternal damnation. He’s the source for healing.

“It’s an immensely powerful instance of Divine Mercy,” said Fr. Groeschel, “a powerful message speaking to self-hate, anxiety, to fear, to all of the things that lead people to neurosis. Saint Faustina’s revelations dovetail with the new Positive Psychology of Dr. Seligman, and Seligman would not deny this. I’ve been in correspondence with him.”

“Can you see how Divine Mercy will come together in all this?” he asked.

With that in mind, the words in 2002 of the Servant of God Pope John Paul II could not have been clearer as to why this message is so urgent — psychologically and spiritually.

“Like St. Faustina,” the Holy Father said, “we wish to proclaim that, apart from the mercy of God, there is no other source of hope for mankind. We desire to repeat with faith: Jesus, I trust in You. This proclamation of trust in the all-powerful love of God, is especially necessary in our own times, when mankind is experiencing bewilderment in the face of many manifestations of evil.”