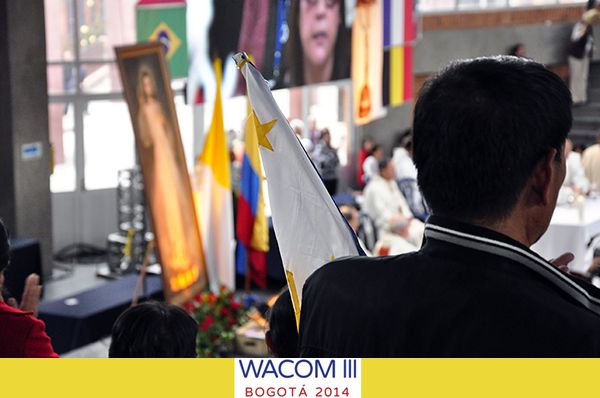 By Chris Sparks (Aug 19, 2014)
The third World Apostolic Congress on Mercy (WACOM) is being held from Aug. 15-19 in Bogota, Colombia, bringing together apostles and friends of the Divine Mercy from around the world. We’ll be sharing insights, images, and news from the Congress as it’s happening, so stay tuned for more, and keep the Congress in prayer!

I can’t believe we’re at the end of WACOM already. So many faces have become familiar here; so much goodwill has been shared between pilgrims from vastly different backgrounds and very distant lands. My Spanglish has come along remarkably well, although I must admit that by the end of the Congress, I’d begun to mix French, Italian, German, and English when I tried to speak to the volunteers or my fellow pilgrims.

And yet, somehow, everyone still managed to communicate that they loved one another.

9 a.m.
We’re back at the Colegio Agustiniano Ciudad Salitre for the last day of WACOM III. On this feast of St. John Eudes, the morning prayer and reflection were led by Fr. Camilo Bernal, CJM, the superior general of the Eudists. He offered a reflection on the founder of his order and the teaching of St. John Eudes, the great promoter of devotion to the Sacred and Immaculate Hearts.

We began the Congress on the solemnity of the Assumption and concluded on the feast of St. John Eudes. This Congress on the Divine Mercy was contained within the Two Hearts throughout.

11 a.m.
Cardinal Schoenborn, Congress president, and Fr. Patrice Chocholski, general secretary of the Congress, led the assembly in lectio divina as a way of preparing our hearts, minds, and souls for a time of reflection and discernment about WACOM.

Then Fr. Patrice asked everyone to form cenacles, or discussion and prayer groups based around language of around a dozen people apiece. The organizers asked the participants several questions, including:

* Could you tell us what you perceive as the call of the Lord through the Congress concerning the mission entrusted to us?

* Which calls & impulses do you feel for the future?

Some of the answers from one of the English language groups included a call to deeper prayer while still “rowing the boat,” or combining more prayer with persistent action in the service of the Divine Mercy message and devotion. Participants also spoke of the importance of refraining from judging others, especially their enemies, for whom they must pray, remembering that all humans are brethren. They also emphasized the need to reach out to the young, who are the future of the Church and the Divine Mercy movement.

Father Patrice and Adriana Maria Vargas, a member of the communications staff for the Archdiocese of Bogota and one of the emcees who had served throughout the Congress, then went into the audience and asked representatives from an array of the different groups to share their group’s answers with the rest of the Congress, making the exercise a powerful time of world-wide discernment of the Lord’s will for the Divine Mercy movement.

Noon
Wow. I just learned that beneath the floor of the gymnasium is the chapel for this school. I went down below because an announcement had been made that sounded like the litany of the saints.

And lo and behold — there was the Eucharistic Lord Jesus in the monstrance on the altar, flanked by about 10 reliquaries and around that many relics of saints. Saint John Paul II was there, as was St. Faustina Kowalska, her spiritual director Blessed Michael Sopocko, the youth reformer and educator St. John Bosco, the great teacher of the lay path to holiness St. Francis de Sales, his spiritual daughter St. Jane Frances de Chantal, and more.

We’re standing, literally, on the firm foundation of the Incarnate Word of God and members of His Mystical Body.

When I returned to the gymnasium, groups were still sharing their discernment. When it ended, Cardinal Schoenborn approached the microphone, and …

And it’s official: WACOM 2017 will be held in the Phillipines!

The National Coordinator for Divine Mercy in the Philippines invites us all to come to his country for WACOM 2017 and gives us a blessing.

I grabbed Fr. Seraphim Michalenko, MIC, the former vice-postulator for the cause for canonization of St. Faustina Kowalska and asked him some questions about that choice.

“The Filipinos have carried the message wherever they go,” said Fr. Seraphim in response to the announcement, “and they are to be found everywhere in the world, even in the northern reaches of Alaska, where they work in the oil fields. They have brought the message and devotion of Divine Mercy [wherever they are]. Wherever you go, and whenever conferences around the country are arranged, many of the attendees are Filipinos! So it’s appropriate that the Congress should be held there. The first one was in Rome. The second one was in Krakow. The third one was in South America under the first South American pope. Now, it should go towards Oceania and the Far East.”

And go east it will.

1 p.m.
Helen Oa from Papua New Guinea took the stage to share some lessons from her work with youth, bringing to the stage with her a man named Vincent. Vincent was one of the many young people blessed by the Church’s works of mercy in Papua New Guinea.

Father Patrice summed up their presentation by saying, “It is very important what they have said to us. Vincent was a drug addict from the margins. The young people are the future of the Congresses. The youth pass through the outskirts” of society and human life, so they are especially deserving of the graces and assistance available through the Divine Mercy message and devotion, as well as the help of those who are missionaries of Divine Mercy.

Cardinal Schoenborn then took the stage to share with the Congress an encounter he’d just had with a Colombian woman, then brought her on stage and allowed her the microphone for several minutes. She has six children of her own, and has apparently taken in over 100 homeless children. She identified herself as someone working in clinical pharmacology and gave a ringing testimony to the power of God’s gracious mercy to bring healing and hope into human existence.

“Nothing is impossible for God!” she proclaimed to strong applause. “I told God, ‘Lord, I am here, a little piece of trash, but you can do anything.'”

“It’s these testimonies that give us the strength to be missionaries of mercy,” said Cardinal Schoenborn. “If every one of us comes out of here with more love, fuller love, then the Congress was a great success.”

He proceeded to thank the conference organizers in turn, working from Fr. Patrice and Cardinal Ruben Salazar, the archbishop of Bogota, and Fr. Edgar Avila, the archbishop’s secretary, on down to the lowest level of volunteers. And then he was followed by Cardinal Francisco Errazuriz, the archbishop emeritus of Santiago, Chile, and legate of the Holy Father, who addressed the Congress for a final time.

He led off by thanking the one organizer that Cardinal Schoenborn had not mentioned: Cardinal Schoenborn himself. Cardinal Errazuriz then gave an overview of the saving mercy of God and how it calls those of us who know that we have received mercy to be merciful ourselves. He reminded his audience that St. John Paul II had put mercy at the center of apostolic life, and had said that “only Divine Mercy can put a limit to evil. Only in God’s mercy would man find peace and happiness.”

“We have to resort, once again, to God with all our strength.”

“We will never be missionaries of mercy if we are not children of mercy.”

He emphasized that God had loved us first, before we were faithful to Him, and so we must also lead with love.

And the end. Cardinal Salazar was lead celebrant for the closing Mass of the Congress.

“It is a great honor for Bogota to have hosted the WACOM,” Cardinal Salazar said. “We need the love, we need a God who sees our misery, accompanies us and lifts us, so we can be instruments of God’s love.”

In his homily, he referred to the Aparecida document, the great charter for the new evangelization which had been largely the work of then-Cardinal Jorge Mario Bergoglio, the present Pope Francis. Cardinal Salazar exhorted the Congress to raise their hearts to the Lord, to let themselves be transformed by God’s gracious and merciful love so that we might transform our neighbors and our world by the power of that love.

During the Mass at the time when we intercede for the dead, Cardinal Schoenborn mentioned the family members of the Holy Father who had just been killed in a tragic car accident in Argentina.

And it’s over. Done. There’s a lot more content to come, though, so keep checking back at thedivinemercy.org and mercycongress.org for further photos, video, and articles bringing WACOM III from Bogota to you.

May God bless you, and please always keep the Marians, the Marian Helpers, and the Divine Mercy movement in your prayers.
_____
Day One