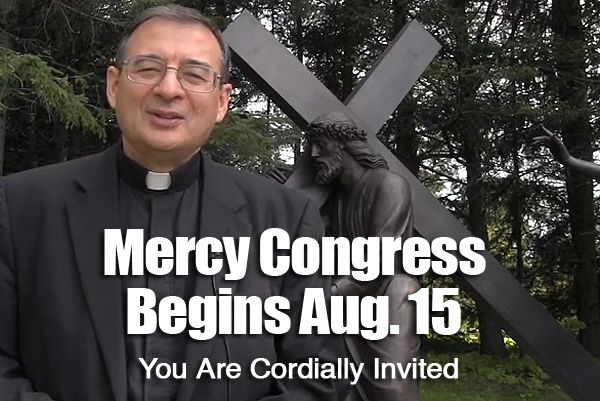 The third World Apostolic Congress on Mercy (WACOM) will be held Aug. 15-19, in Bogota, Colombia, and registration is still open.

The Congress will offer the opportunity “to study, to reflect on, to celebrate the message and reality of the richness and power of God’s mercy,” says Fr. Kaz Chwalek, MIC, in the video below. “[God’s mercy] is the very core of our faith and our hope and our life.”

Father Kaz, a member of the Congress’ organizing body, invites you to Bogota for what will surely be an historic event:

To register, visit the official Congress website at WACOMColombia.org.

According to WACOM General Secretary Fr. Patrice Chocholoski, Pope Francis has taken a personal interest in the Congress, particularly since it’s being held in the Holy Father’s home continent of South America. Following the consistory to create new cardinals in February, 17 cardinals presented the Holy Father with a letter about the Congress, and “he got directly involved in WACOM III,” Fr. Patrice said.

Good to hear of this ; hope the churches and people there would be open to the graces through the Image and be dleivered from the scourge of greed and poverty !
Hope may be in Oklahoma city too , there could be a large Vilnius image like in Chicago , to esp. deliver those who want to side with the agent of death, destruction and hatred !
May the Fatherly gaze of the image help many to know to whom they are to belong and avoid the occasion of bringing ecil unto even untold generations !

Hope there would be enough in Ok.city to already do prayer marches around, calling on the holy angels and God’s mercy , on the living and departed, esp.children murdered through abortion , ancestors of native Americans etc , in lives of all of whom and their families, there still might be enemy claims and its related effects , at many levels !
St.Faustina and St.John Paul 11, pray for us all !
Mother Mary, take over !
Abba Father , help us to know Your goodness and power, through Your Holy Church ,in Your Son and The Spirit , to love and adore You more, as we entrust us and all in our lives, living and deceased . to Your mercy !