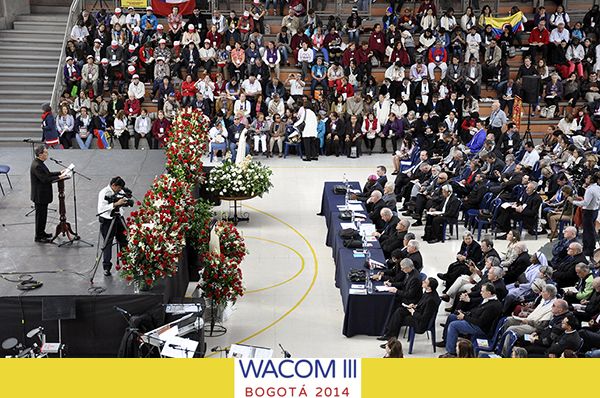 By Chris Sparks (Aug 16, 2014)
The third World Apostolic Congress on Mercy (WACOM) is being held from Aug. 15-19 in Bogota, Colombia, bringing together apostles and friends of the Divine Mercy from around the world. We’ll be sharing insights, images, and news from the Congress as it’s happening, so stay tuned for more, and keep the Congress in prayer!

As soon as we arrived at the Congress site this morning, Dave Maroney of Mother of Mercy Messengers (MOMM) pointed and started to laugh. Where the lines of pilgrims had stood waiting to be let into the Congress yesterday morning there now stood a street market. Lines of tents and food vendors stood waiting eagerly, expectantly, ready to serve the 1200 registered pilgrims from across the world whatever they needed or wanted to eat or drink. The spirit of hope and enterprise is certainly strong in this country. From what we heard during the talks, they certainly need it.

10 a.m.
Once again, the Congress opened with morning prayer, setting the tone for the day and confirming for all the pilgrims the reason for the gathering: trust in Jesus, who is the Divine Mercy.

And then the Cardinal Archbishop of Bogota, Rubén Salazar Gómez, took the floor. (Whole talk here.)

He spoke movingly of the challenges Colombia has faced in the past: narcoterrorism, violent rebel groups, and government oppression of the people. Cardinal Salazar described some of the very real, truly catastrophic sort of situations faced all too frequently by Colombian citizens, including the disappearance, torture, or murder of loved ones at the hands of one of the many forces tearing at civil society.

“Man can be a victim of man. That is the reality we witness with horror every day,” he said, both in Colombia and around the world. But God will always love man, as the Lord demonstrated throughout the Old Testament in His relationship with the Chosen People. He loved past their sins, most completely in sending His only beloved Son (see Jn 3:16-17).

We come to share in the love of Christ through the sacraments, especially Baptism and the Eucharist. “Our love becomes the same love of Christ and has the same characteristics,” declared the cardinal. “Each of us are able to have mercy because the Son of God in His death and resurrection has enabled us to transcend sin and death.”

The cardinal acknowledged that in the past, he had cried out to God, asking why? Where was the love of God when innocent families were destroyed, children killed, communities ripped apart by injustice and a spiraling cycle of violence and revenge? Cardinal Salazar named particular acts of injustice familiar to all Colombians, particular massacres or disappearances.

“Where was God?” Cardinal Salazar asked. “He was on the Cross. Yes, crucified, suffering in the tearing of His own flesh. The suffering of wives and mothers who want to embrace the bodies of their cold dead sons and husbands is like the suffering of His mother” at the Crucifixion.

“God, moved by merciful love, fully wanted to share our human condition and share all the suffering due to sin,” said Cardinal Salazar.

After reiterating that “even those who have committed the most abominable crimes have access to the Lord’s love and mercy,” he issued a strong call for repentance on the part of perpetrators of injustice, whoever they may be, which was greeted with applause.

11 a.m.
A powerful set of testimonies. First, Dr. Diana Sofia Giraldo, the founder of the Fundación Víctimas Visibles, spoke. Her organization aimed to give the victims of the many conflicts and crimes within Colombia a voice, and is now engaged in the same work around the world, as well.

Dr. Giraldo described the deep wounds left upon Colombia by so many senseless acts of violence, how Colombians are “trying to make sense of this “useless pain,” and the importance of faith in this process. “This is when we think for the first time, if all the wounds suffered by Colombians could be put at the foot of the Cross, they could all be transformed and become a seed of reconciliation,” she said. “We have learned from St. Faustina and our St. John Paul II; he did not waste a second of pain.

She brought on stage several victims and proceeded to describe their stories, putting a face on the whole issue. One woman, Emiliana, lost her husband to kidnapping. She still doesn’t know if he’s alive or dead. The other stories run the gamut: one woman lost a loved one to violence, took revenge, and eventually turned to God for mercy and forgiveness. Another lost her father to murder, perpetrated before the family while they were at prayer. Her husband was also murdered, a son kidnapped and killed; a daughter kidnapped and killed; another daughter diagnosed with cancer, given a short time to live, and yet who is alive many years later.

And now we hear from some of those victims of acts of violence.

It’s difficult as a foreigner to hear such a litany of atrocity and pain, of tragedy compounding tragedy, of the sort of grief that we think can only strike rarely, only happen once in a lifetime, or else we would break beneath the pain.

But here stand victims of such tragedies. Some of them have experienced, not one, but a long line of such woe, and here they are at a Congress on mercy, speaking of the love of God, the power of and need for forgiveness, the strength which God has given them to love their enemies and forgive.

It’s a uniquely powerful witness, a uniquely powerful testimony to the Divine Mercy and what happens when we open our hearts to God’s transforming love. The Congress is moved often to applause. One of the victims ends the session by leading everyone in prayer for the perpetrators of the violence, for their countries, for peace in the world, for the Church.

Antonio Jose Garcia Fernandez, a lawyer with the Colombian National Commission of Reconciliation, closes out this first round of sessions with a presentation on the process of justice and reconciliation.

His session starts with the bombshell admission that his younger brother was among the perpetrators of one such atrocity: a battle in a small village between very young people, recruited from amongst the miners in the rural areas of Colombia by some of the armed militias to fight each other.

Garcia Fernandez admits that at the time, he wasn’t interested, wanted nothing to do with the conflicts and struggles in Colombia, and asked the probing question of what degree of culpability he and every other bystander shared for their unwillingness to be involved.

He gives an overview of the peace process, the long road of reconciliation and forgiveness necessary for civil society to heal. He makes the point that those who “demobilize” from the militias and “self-defense” groups involved in the conflict in Colombia must have a way to reintegrate with society, to regain the trust of their neighbors, or else the problems facing Colombia will not end.

Noon
Here we have a presentation on the theology and philosophy of being a Divine Mercy apostle today in light of the Aparecida document. Written under the guidance of former Cardinal Jorge Mario Bergoglio (now Pope Francis), the document stems from the Fifth General Assembly of the Bishops of Latin America and the Caribbean, held in Brazil in 2007. The talk is given by Bishop Santiago Silva and Fr. Leonidas Ortiz Lozada. Father Lozada is the adjunct secretary of CELAM, the Latin American Bishops’ conference.

Father Lozada cited St. John Paul II’s document Ecclesia in America, pointing out that the late, sainted Holy Father had explained that holiness isn’t hard. It’s “nothing more than expressing God’s mercy in my life” to the poorest, the sick, and the needy. (#30) As Pope Francis has pointed out, a little mercy warms the cold world.

1 p.m.
An “African” Mass. The lead celebrant is Bishop Martin Uzoukwu, from Minna, Nigeria. You take a Latin American music ministry, combine that with the African joyful Mass, and the whole Congress hall was filled with a joyful noise unto the Lord.

The bishop thanked God, the Blessed Virgin Mary, and the WACOM organizers in his homily, putting the thanks in the thanksgiving to God of the Mass. He prayed for all those present and all those who were present in spirit (so everyone reading this, know you were prayed for!), and shared with participants prayers for the Nigerian church he’d had distributed in the wake of the bombing of his parish church on Christmas morning in 2011. The prayers included intercession for the attackers, asking for their conversion and God’s grace to reconcile them with their neighbors.

Bishop Martin Uzoukwu shares about the spread of the Divine Mercy message and devotion in Nigeria.

The reverence of the participants is palpable, though expressed in a range of ways as vast as the distances between their homelands. At the elevation, there is a moment’s pause, then a low rumble swells around the gym as many voices in many languages address their Lord and God with faith and devotion. The Our Father, likewise, is a moment of communion and a certain susurration of sound as everyone prays the prayer that Jesus taught us in their own languages.

Evening
Marcela Murillo, editor of Fuente de Misericordia, shares what she saw in the afternoon:
Today we went to the La Esperanza de Vivir (The Hope to Live) Center located in Suba, Bogota’s District 11 in the northern part of the city. This Center is a nonprofit organization that provides support to people with disabilities through educational programs and activities. The center was founded 27 years ago by a group of mothers who had children with disabilities like autism, cerebral palsy, etc. Today, more than 40 young men and women attend the center. Some of them have been attending the Center since the Center began. They are organized in three classrooms depending on their disability:

*Pre-Workshop: This is a big classroom where children are evaluated to determine their skills and abilities. Teachers work closely with parents and children to set goals and develop their talents.

*Workshop: In this room, they do different crafts, such as pottery, painting, crafts with recycled materials, etc. They sell some of their creations to raise funds for their organization.

*Stimulation: This area specializes on children with autism and their needs.

After a heartfelt welcome, the children entertained their guests with dances and a tour of the building. They shared raspberry juice and empanadas, a very typical dish of Colombia, with the guests. Then we made a circle, held hands, and prayed to the Lord.

Sandra says, “My son and I came to this center 14 years ago. Since then, he has learned how to eat by himself and he has improved significantly.”

Maria Eugenia, one of the founders, says, “It’s amazing. the things these children can do if you just give them a little bit of love. This is what mercy is all about. Like in the parable of the Good Samaritan, we are helping each other here; we are a family.” Maria Eugenia is the mother of Andrea, a young adult who has been attending the Center since its founding, and still comes to the Center every day to participate in the different activities.

Martha says, “Each one of our kids is a testimony of love, of mercy. Each one of them is a blessing. They found a place of love and freedom where they can express themselves freely.”

Before we left, Maria Eugenia said, “Today we felt the mercy of the Lord. Why? Because it didn’t matter that we all spoke different languages and we come from different countries, but today we are united as one family.”
_____
Day One