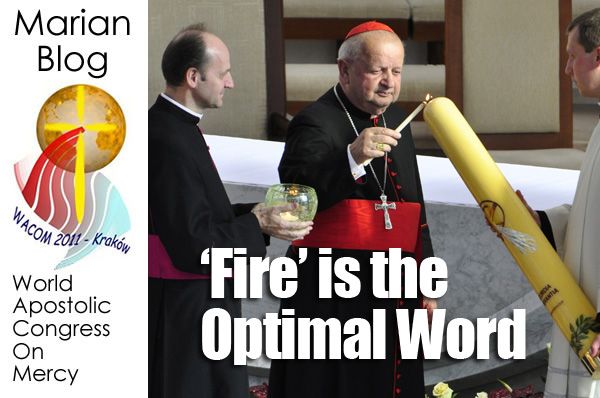 Allow me to encapsulate the essentials of this historic gathering:

Upon a small hilltop on the outskirts of Krakow, Poland, the “spark” of the modern Divine Mercy movement was lit with the revelations of St. Maria Faustina Kowalska in the 1930s.

Nearly 2,000 Divine Mercy apostles from 69 countries gathered in October on this small hilltop for the second World Apostolic Congress on Mercy, an historic event with potentially major repercussions. The Mercy Congress underscored two truths: the urgency of the Divine Mercy message for the Church and the world, and the fittingness of the metaphor that defines its spread, from “spark” to “flame” to “wildfire.”

For five days, from Oct. 1-Oct 5, it was standing-room only inside the Basilica of Divine Mercy, a mere several hundred feet away from the convent of the Sisters of Our Lady of Mercy where Jesus told St. Faustina, “Mankind will not have peace until it turns with trust to My mercy” (Diary of St. Faustina, 300). Jesus told St. Faustina that His mercy message to her — a reinforcement of the Gospel call to turn away from sin, turn in trust to His mercy, and share His mercy with others — stands as the “spark” that “will prepare the world for My final coming” (Diary, 1732).

The Joy: It Shows
A spark needs fuel, oxygen, and the proper conditions for a chemical chain reaction. In the case of the Divine Mercy movement, the fuel consists of the countless lost souls searching for meaning. The oxygen consists of the evangelization efforts of those transformed through the mystery of Divine Mercy and the special gift God gave us through St. Faustina. A chain reaction is inevitable.

“The fire has been set, and now its light is reaching more and more hearts in more and more places around the world,” said Fr. Kazimierz Chwalek, MIC, the Marians’ Provincial Superior in the United States and Argentina. “Congress attendees have so much joy, and it shows. When you see their enthusiasm and joy, that brings encouragement and hope to others, and this consoling message exponentially grows from there.”

Fire — purifying fire — there’s no better way to describe it.

“What’s in my heart — and what’s on the heart of everyone here — is to get this spark of Divine Mercy out into the world,” said Purisima Narvaez, a Marian Helper from Glendale, Calif., who joined a Mercy Congress pilgrimage led by the Marians.

Is There a Doctor in the House?
The bells tolled at the Basilica of Divine Mercy and in churches throughout Krakow, as the Congress commenced on Oct. 1. Five days later — on the Feast Day of St. Faustina — the impact of the event became clear.

Attendees in the Basilica roared with applause when Cardinal Christoph Schönborn of Austria, president of the Mercy Congress, called for St. Faustina to join the ranks of only 33 other saints who have been declared Doctors of the Universal Church. His Eminence announced that on behalf of the Congress, a formal request has been made to Pope Benedict XVI to bestow upon St. Faustina the distinguished ecclesiastical title of Doctor of the Church. Signatories of the request include prelates who attended the Congress — Cardinals Stanislaw Dziwisz, Audrys Juozas Backis, Stanislaw Rylko, Joseph Zen, Franciszek Macharski, and Philippe Xavier Barbarin.

“Her Diary, written in simple language, helps us to comprehend how God proceeds with souls,” says Fr. Seraphim Michalenko, MIC, who served as vice-postulator of St. Faustina’s canonization cause and who helped lead the Marians’ Mercy Congress pilgrimage. “And it gives us a richer understanding of the relationship between mercy and love and the notion of merciful love as the source and ultimate reason for the whole of salvation.”

‘An Official Mission’
The conclusion of the Mercy Congress included two more news items. Cardinal Dziwisz announced plans to found an international academy in Krakow that will serve for theological and pastoral formation on Divine Mercy. In addition, inspired by the Marians, through the person of Fr. Kazimierz, Cardinal Schonborn announced that on behalf of the Congress representatives, a letter was sent to the Vatican proposing that the Divine Mercy message be placed at the center of the “New Evangelization” call from the Holy Father.

Pope Benedict XVI has chosen “New Evangelization” as the theme for the next world Synod of Bishops in Fall 2012. He said the theme reflects a need to “re-evangelize in countries where Christian faith and practice have declined, and where people have even moved away from the Church.”

“This is an amazing achievement from this Congress,” said Fr. Patrice Chocholski of Lyon, France, general secretary of the Congress. “We are agreeing, as a Church, the need to present Divine Mercy to the world, otherwise people are afraid of God or have no idea who God is. … This is a communion, a communion of Bishops and Cardinals in agreement that Divine Mercy is an official mission of the Church — not just of devotional groups, who are very important, not just certain parishes, but the whole Church.”

“Mercy as the Source of Hope” was the theme of the Congress, which included an entrustment of the world to The Divine Mercy, theological presentations, testimonies, Holy Masses, missions, and a special greeting from Rome from Pope Benedict XVI.

After praying the Angelus Sunday, Oct. 2, Pope Benedict XVI addressed a message the Mercy Congress, making reference to the Congress’ theme and to St. Faustina. “Dearly beloved,” he said, ” reinforce your trust in the Lord through common reflection and prayer so that you will take effectively to the world the joyful message that ‘mercy is the source of hope.'”

To show appreciation to the Marians for their pivotal role as official promoters of the Divine Mercy message and devotion since 1941, Cardinal Dziwisz presented Fr. Kaz with a first-class relic of Blessed John Paul II, known as the “Great Mercy Pope,” which will be displayed at the National Shrine of The Divine Mercy, in Stockbridge, Mass.

“It’s a drop of his blood on cloth,” said Fr. Kaz. “It’s an extraordinary gift for our Shrine. Alongside St. Faustina and her confessor, Blessed Michael Sopocko, we have a relic of the third great promoter of Divine Mercy.”

The Congress follows in the heels of the first World Apostolic Congress on Mercy held in Rome in 2008, an event called for by Pope Benedict XVI to perpetuate the work of Blessed John Paul II.

By the grace of God, there will be a third World Apostolic Congress on Mercy. More than likely it will take place in Bogota, Columbia. In the meantime, there’s talk of another major Divine Mercy gathering in Krakow. No dates have been set.