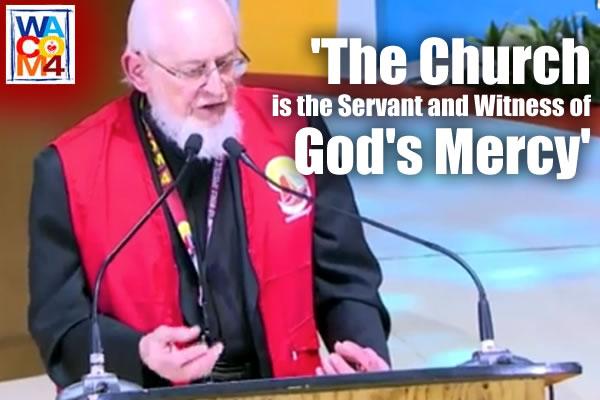 The Church is the Body of the Face of Divine Mercy

The focus of Day Two was the role of the Church as the Body of the Face of Divine Mercy. Attendees reflected on the benevolence of God who abundantly nurtures His children with His love and mercy. The day included four major talks at the Royal and Pontifical University of Santo Tomas, one of the talks being from our own Fr. Seraphim Michalenko, MIC.

The day began with His Eminence Orlando B. Cardinal Quevedo, OMI, DD, Archbishop of Cotabato, who spoke on “The Church is Called to be a Communion in the Love and Mercy of God in Jesus Christ.” Following Cardinal Quevedo, Fr. Patrice Chocholski, the WACOM 4 Secretary General and current Curé d’Ars spoke on “The Church receives and celebrates the Mercy of God through the Word and Sacraments, especially the Eucharist and Reconcilation.”

Father Seraphim’s talk was entitled “The Church is the Servant and Witness of God’s Mercy.”

Father Seraphim began, “Something that is often missed about the Image of Jesus, The Divine Mercy, is that basically it represents Him as the Great High Priest of the New Covenant in His own Blood.… Jesus commanded Sister Faustina to have the vision she had of Him painted and venerated, given special honor and devotion, because it is an instrument of His presence and His activity.”

The basic meaning of the rays [in the Image] is what we read in the Gospel of John at the moment of Christ’s death. John does not say like the other evangelists that He gave up His spirit, or breathed His last, St. John said that He handed over the spirit, and the Spirit is the life of Jesus. So at that last breath, Jesus handed over the Holy Spirit through Mary and John at the Cross, and that was the Church conceived to be born on Pentecost. So the rays in the first place represent the gift of the Holy Spirit. Their separation into two colors only happens after a person’s death. What is the function of the pale ray? It is the serum of the blood that courses continuously through the body taking out the toxins from every single cell that’s there because of metabolism. At the same time, the red component carries oxygen in the blood — the life-giving oxygen to every cell. That is why Jesus said that the white ray represents baptism, and also the Sacraments of Reconciliation and Anointing of the Sick, and the red ray represents the Eucharist, which is the life of the soul.

The Archbishop of Medan, Indonesia, Most Rev. Anicetus Bongsu Sinaga, OFM Cap, DD, delivered the last talk of the day on “The Church is sent to be a Missionary of Mercy to the Poor and Suffering of the World.”

The homilist of the Mass which closed the day was the President of the Catholic Bishops’ Conference of the Philippines, Most Rev. Socrates Villegas, DD.

CBCP News in the Philippines reported on the homily:

“Why? Because we are afraid to look at mercy in the eyes. We are afraid that mercy will challenge us to be merciful and we are not ready!” he said.

And among the signs that prevents people from being merciful is the fear of being opposed.

He said that if people will fight evil, it will strike them back “and so we keep quiet in the caves of our security and safety” to avoid criticisms.

“But brothers and sisters in Christ, the destiny of people who show mercy is martyrdom. And martyrdom is a great act of mercy,” Villegas said.

The archbishop also asked the faithful not to be afraid of being opposed if only to have a world that is capable of showing mercy.

Throughout the day various people gave testimony to the working of Divine Mercy in their lives, to give hope to those attending and inspire all to continue their work in God’s Kingdom.

Convened every three years, WACOM is an international gathering of Divine Mercy devotees and promoters, including bishops, priests, religious brothers and sisters, and laity. It was first convened by the Vatican on April 2-6, 2008, in Rome, Italy, which coincided with the third anniversary of the death of St. Pope John Paul II. The second WACOM was held in Krakow, Poland, from October 1 to 5, 2011, and the third was held in Bogota, Columbia, from August 14 to 18, 2014. Between WACOMs, continental, national, and regional congresses take place.