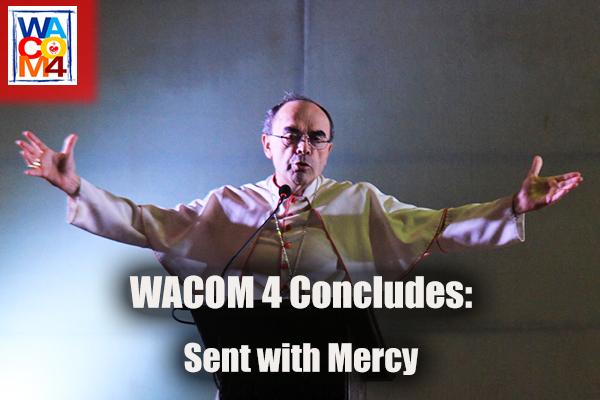 By Melanie Williams (Jan 21, 2017)
The final day of the Fourth World Apostolic Congress on Mercy was Friday, Jan. 20, 2017. It was held in Bataan, Philippines near the ocean and the theme was God’s mercy and the environment.

The final presentation at WACOM four was by the papal delegate to the congress, the Archbishop of Lyon, France, His Eminence Philippe Cardinal Barbarin, DD. His presentation was entitled, “Being Sent as a Church of God’s Mercy to the World.”
His Eminence said, “Look at those who are sick, who are in despair… take care of them.” He prayed, “Lord, keep our eyes opened, that we will be moved to act towards mercy.”

Watch his full exhortation, given in French and translated live by Fr. Patrice Chocholski:

The Congress was concluded with a missionary sending ceremony by the sea and a closing celebration of the Holy Mass. The Holy Mass was celebrated by the Archbishop of Nueva Segovia, Most Rev. Marlo Peralta, DD, with the Bishop of Balanga, Bataan, Most Rev. Ruperto C. Santos, DD as the homilist.

At the conclusion of the congress, the Islands of Samoa, in Oceana, was announced to be the location of the Fifth World Congress on Mercy in 2020.

The theme of WACOM 4 was “Communion in Mercy; Mission for Mercy.” It aimed to accelerate the culture of mercy in the Church and in the World. The week was a “Pilgrimage of Mercy,” which brought international delegates to different holy places throughout the Philippines so to showcase the Filipino’s lived faith in Jesus, The Divine Mercy.

We are all sent forth to bring mercy to the world.

Thank you to CBCP News for the photo and video coverage of WACOM 4.

Convened every three years, WACOM is an international gathering of Divine Mercy devotees and promoters, including bishops, priests, religious brothers and sisters, and laity. It was first convened by the Vatican on April 2-6, 2008, in Rome, Italy, which coincided with the third anniversary of the death of St. Pope John Paul II. The second WACOM was held in Krakow, Poland, from October 1 to 5, 2011, and the third was held in Bogota, Columbia, from August 14 to 18, 2014. Between WACOMs, continental, national, and regional congresses take place.