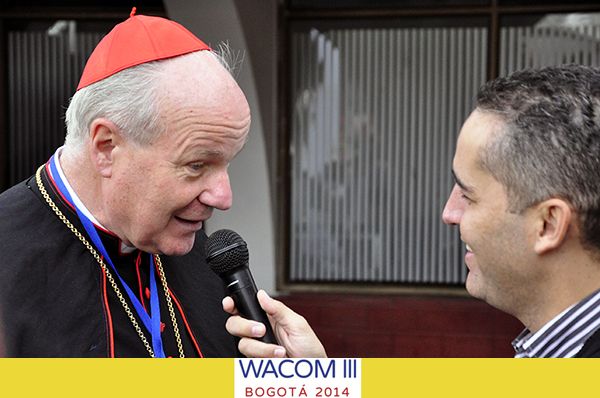 The third World Apostolic Congress on Mercy (WACOM) is being held from Aug. 15-19 in Bogota, Colombia, bringing together apostles and friends of the Divine Mercy from around the world. We’ll be sharing insights, images, and news from the Congress as it’s happening, so stay tuned for more, and keep the Congress in prayer!

More Colombian roses adorned the main stage today at WACOM, and of course, the Divine Mercy image had a special place before the gathered pilgrims, serving to mediate the graces promised by Jesus to all the pilgrims below, as well as all the people watching on CTV (see Diary, 327, 742, 313). Also present were a number of relics, including relics of St. John Paul II and St. Faustina. You just never know who you’ll encounter at WACOM, do you?

Oh — and Jesus Himself put in a physical appearance.

10 a.m.
Today the venue shifted to the Colegio San Pedro Claver (the St. Peter Claver School) for what was essentially an all day Divine Mercy market and outdoor festival. We gathered in the schoolyard in the open air, sharing the day with local parishioners and families from the school.

Bogota is an archdiocese, with several different dioceses within its limits. Today’s portion of WACOM took place within the diocese of Fontibon, and the bishop of the Fontibon diocese, Bishop Juan Vicente Cordoba Villota, S.J., greeted the Congress pilgrims and welcomed Divine Mercy in his diocese.

Many of his flock also attended the day’s events, filling the spacious schoolyard and outdoor basketball court till it seemed like every flat surface had someone sitting or standing on it. The schoolyard is lined with booths and tables for different Divine Mercy apostolates and ministries, as well as some businesses selling books, liturgical items, and other items of religious interest to those gathered from around the world. The place is really alive, really busy, and yet there’s plenty of room to breathe.

After morning prayer from the Liturgy of the Hours, interspersed with much praise and worship, we heard from Bishop Eugenio Lira, auxiliary bishop of Puebla, Mexico, and general secretary of the Mexican Episcopal Conference. He was very funny, interspersing teachings on mercy with jokes and humorous stories that had the largely Spanish-speaking audience (and the translator whispering in my ear) regularly breaking out in laughter.

Noon
Cardinal Francisco Errazuriz, Pope Francis’ personal representative at the Congress, was the lead celebrant at Mass this morning.

Some pilgrims from Papua New Guinea presented the gifts in style, sharing with the Congress some elements of their cultural heritage, all while seeking to honor the Lord.

Cardinal Errazuriz closed the Mass by imparting the Holy Father’s Apostolic Blessing on all who were in attendance, as well as all our loved ones back home. So Marian Helpers and everyone who reads this piece, consider yourself blessed by the Holy Father!

1 p.m.
Father Patrice Chocholski, general secretary of WACOM, shared some thoughts on WACOM III and the role of WACOM in the life of the Church (transcription here).

Then on my way to lunch from that interview, I happened across Cardinal Schoenborn, president of WACOM, and seized the day. The cardinal recognized the name of Stockbridge, and sent a special greeting to all Marian Helpers who live and spread Divine Mercy:

Cordial greetings to Stockbridge, to all the devotees of Divine Mercy! Some of you, I have already met in different occasions. All my blessings and best wishes, and go on courageously to be witnesses of God’s mercy, of Christ’s love, of Our Lady’s mercy. Be witnesses of mercy.

And what’s been the highlight of the Congress for you so far?

I think yesterday the witness of the victims of the violence and their readiness [for] forgiveness and their call to mercy for reestablishing peace in this deeply wounded country.

So, Marian Helpers, you’ve been commissioned by the cardinal: Be witnesses of mercy.

2 p.m.
The apostolates haven’t been idle this Congress.

The Mother of Mercy Messengers (MOMM), Dave and Joan Maroney, have been distributing stickers related to their Divine Mercy for America campaign which say “Have mercy on US and on the whole world!”

Dr. Bryan Thatcher, founder of the Eucharistic Apostles of the Divine Mercy (EADM) has been distributing contact information and sharing his cenacle manuals with all and sundry, greeting old friends and making new contacts for the spread of the cenacles throughout the Congress.

Nurse Marie Romagnano, founder of Healthcare Professionals for Divine Mercy, and Fr. Seraphim Michalenko, MIC, representing the John Paul II Institute of Divine Mercy, have been spending time with the bishops and cardinals, building relationships that will help the Marians’ mission of mercy for a long time to come.

One Healthcare Professional for Divine Mercy, Dr. Helen Jackson, took a bundle of Spanish-language Divine Mercy chaplet prayer cards and began walking amongst the local people gathered at the back of the schoolyard, distributing the cards to whomever would take them. Many took several for friends and family, as well.

Evening
The afternoon has been a “festival of mercy,” with much praise and worship, many testimonies (all, I believe, in Spanish), and a talk by Cardinal Orani Tempesta, archbishop of Rio de Janeiro in Brazil and the host of the 2013 World Youth Day (WYD). He interwove reflections on the WYD just passed with the teaching of Pope Francis on that occasion on mercy and his challenge to youth to be witnesses of Jesus’ mercy in the world.

Man, it’s joyful in this square.

At 3 o’clock, of course, the Congress paused to observe the Hour of Great Mercy. Guess who got to help lead a decade of the Chaplet in English? Drs. Bryan Thatcher and Helen Jackson! The Chaplet was followed by further prayer, praise and worship, and all the fervor a crowd of Divine Mercy pilgrims can muster. Many in the crowd would either hold up a copy of the Divine Mercy image or have one at their seats which they venerated during the times of prayer.

Later, when the festival had resumed, I caught sight of Dave and Joan Maroney, Fuente de Misericordia editor Marcela Murillo, Dr. Bryan Thatcher, and Dr. Helen Jackson on the move, so, of course, I tagged along. As we passed through the back entrance of the schoolyard between several Policia Nacional, I found out that Fr. Kaz Chwalek, MIC, provincial superior for the Mother of Mercy Province, had said we had to see Fontibon’s Catedral de Santiago Apóstol (the Cathedral of St. James, Apostle). So to the cathedral we went.

I could go on and on about the beautiful statuary, the gorgeous architecture, and the liberal use of gold, but I won’t. Instead, I’ll say that it seemed like everyone felt a sort of deep relief when they saw that there was a monstrance front and center in the Church, and the Lord was waiting for us there. Everyone spent a considerable amount of time in prayer, just resting in the presence of Jesus.

There we were, thousands of miles from home, strangers in a strange land, and yet we could walk through the doors of the Church and come home to God, the same God that we worshiped in our home parishes, the same God reposing in the tabernacles at the National Shrine of The Divine Mercy, the same God who holds the cosmos in existence at every moment of every day and so is present in all places at all times.

We can visit Him in His Real Presence “wherever the Catholic sun doth shine,” as Hilaire Belloc put it, and that Catholic sun does shine wherever there’s a Catholic priest to offer Mass. We can talk to Him anywhere, because we wouldn’t exist without His constant, attentive love.

So after a period of prayer, we returned to the Colegio, noticing along the way that the front entry of the cathedral was liberally covered with posters announcing WACOM’s presence right next door at the Colegio San Pedro Claver and inviting all and sundry to attend. Guess what happened shortly after our return?

That’s right: a Eucharistic Holy Hour. Exposition, Benediction, the same prayers that are prayed wherever a Holy Hour takes place, though again, they were prayed in a multitude of languages, but with the same Spirit guiding the prayer.

The meditation was offered by Monsignor Ettore Ballestrero, apostolic nuncio to Colombia, in several languages, including French, Spanish, Italian, and English. He based his meditation of Pope Francis’ teachings on mercy, speaking to Jesus, the Divine Mercy, throughout.

* “We come today to bring You the whole of humanity. We entrust ourselves to Your mercy, especially our families, the youth, religious people. We bring to Your heart the Christians that are being persecuted because of their faith. Francis tells us that there are more martyrs nowadays [than in the previous centuries of the Church’s history]. Lastly, we entrust to You our enemies. You have taught us to forgive. Please help us to forgive our enemies.”

* “Alms forgive sins like water puts out fire. If we are able to do deeds of mercy, let us rejoice.”

* “Mary, you are the Mother of Mercy. He wanted that we should receive everything through you, because you are a case of mercy. You, Mary, are the steps through which mercy came down. Mary, help the Colombians to live one next to the other and not against each other. Help us to have mercy in our hearts so that we may be messengers of mercy. Amen.”

It was a very good day. Tomorrow: the Salt Cathedral.
_____
Day One