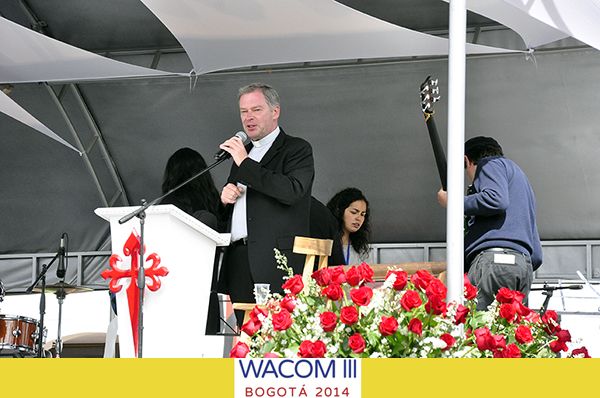 Father Patrice Chocholski, World Apostolic Congress on Mercy (WACOM) general secretary, took some time out of his busy schedule at the Congress to discuss what WACOM is and how the whole Church is called to proclaim Divine Mercy.

Now, Father, you’ve played a role in organizing all of the Congresses?
The diocese of Bogota completely organized the Congress. As the WACOM secretariat, we invited the people. We know the delegations from all over the world, so we invited them, we motivated them. We invited also all those who have a talk or testimonies because we got to know them all over the world, but we are very grateful to the archdiocese of Bogota that offered the priests, helped to be the local organizer. We are very grateful also to all the laypeople, about 200 volunteers, that have been doing their best to organize the Congress. We are in charge also of the future of the congresses, so this is more or less our duty on this.

Where do you see WACOM’s place in the life of the Church?
WACOM wants to be an answer to the universal call to the Divine Mercy John Paul II gave on August 17-18, 2002. It was a universal call to the universal Church and also to the world, and so we feel the duty to answer this call with the whole church. We had a first Congress in Rome in 2008. Pope Benedict presided at the first Mass of the Congress. Then we were in Krakow in 2011 [where] St. John Paul II, St. Faustina [lived]. And now it is the Third World Congress. We are no longer in Europe; we are in a country where mission is first, and so this fits with the goal of John Paul II that Divine Mercy may become the paradigm of evangelization. Pope Francis, who always speaks in terms of mercy, wanted to participate to this Congress. He could not because he was already involved with Korea, but he sent his message to Cardinal Schoenborn as president of WACOM, to the Archbishop of Colombia. It is a very beautiful message in which he speaks of all the saints as an image of the Divine Mercy incarnated with the help of the unique incarnated Word, Jesus, and he calls us once again to mission. So it is very special, this Congress. It will help humanity, human kind of the third millennium, to walk in the light of Divine Mercy according to the prophecy of St. John Paul.

What has been the highlight for you of this congress so far?
Reconciliation through mercy. The world will not find peace if it does not turn itself to the Divine Mercy, the mystery of mercy, and then mission. Reconciliation and mission.

What would you say to all those Divine Mercy followers who couldn’t be at WACOM? What message would you send them?
I invite you to do the same in your country, in the United States, in your diocese, in your parishes. Be in contact with those who participated, because it is a kind of model. In the morning we have good conferences, good talks with content, we have good testimonies, we have joyful celebrations, and then in the afternoon, we go outside because mercy’s going outside to visit the poor, to visit everybody, and to bring the Divine Mercy, to announce the Divine Mercy to all mankind.